This page describes an edition of the game that has been officially discontinued.
This edition is no longer updated, but can still be purchased digitally or physically.
New Nintendo 3DS Edition 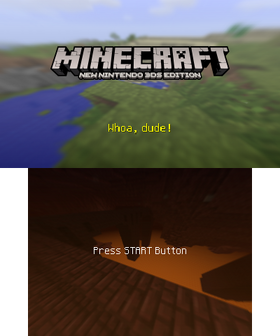 Minecraft: New Nintendo 3DS Edition is the edition of Minecraft developed by Other Ocean Interactive and Mojang Studios for the New Nintendo 3DS/2DS systems, but is not compatible with the original Nintendo 3DS/2DS systems. It was released digitally on the Nintendo eShop simultaneously in North America and Japan on September 13, 2017,[9][10] hours after its announcement during a Nintendo Direct, and physically in North America on November 10, 2017.[2] The game was finally released worldwide on September 20, 2018, one year and seven days after the original release.[11] Although updates for this version were discontinued with 1.9.19 on January 15, 2019,[12] it can still be purchased digitally through the Nintendo eShop (until late March 2023) or physically at a North American retailer.

As of 1.9.19, the New Nintendo 3DS Edition has not received new feature updates, such as the Update Aquatic, Village & Pillage, Buzzy Bees, the Nether Update, and Caves & Cliffs.

The New Nintendo 3DS Edition's most recent feature update is the Discovery Update.

The New Nintendo 3DS Edition has the following differences from other editions:

In addition, there are more skin packs available for purchase in the in-game store:

There are four texture packs included with the game:

In addition, there are more texture packs available for purchase from the in-game store:

There is one mash-up included with the game:

In addition, there is one more mash-up available for purchase from the in-game store: