Edit
watch 28:07
Minecraft Interactive Experience
Do you like this video?
Play Sound
Netherrack 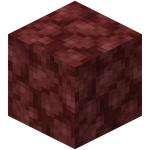 Netherrack is a rock-like block found in the Nether and in ruined portals.

Netherrack can be mined only with a pickaxe. It drops nothing if mined without one.

Netherrack makes up most of the Nether's terrain, and also generates as part of ruined portals.

Netherrack can be obtained by mining nylium without Silk Touch.

Crimson or warped nylium transforms into netherrack if a solid, opaque block is directly above it.

Netherrack is mostly used as a cheap building block. Because of its abundance and softness, it is often used to construct temporary structures that acts as scaffolding, blockage, or other purposes.

When netherrack's top is lit on fire, the fire burns indefinitely.

Using bone meal on netherrack placed next to warped nylium or crimson nylium transforms the netherrack into more nylium.

Analyzing the netherrack in a material reducer, it turns out to be a volcanic silicate rock rich in mercury.‌[Bedrock and Education editions only]

Netherrack can be placed under note blocks to produce "bass drum" sounds.

Issues relating to "Netherrack" are maintained on the bug tracker. Report issues there.