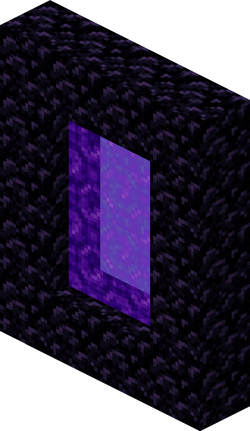 This article is about the structure. For the block that provides the teleportation, see Nether Portal (block).

A nether portal is a manufactured structure which acts as a gateway between the Overworld and Nether dimensions.

A nether portal is built as a vertical, rectangular frame of obsidian (4×5 minimum, 23×23 maximum). The four corners of the frame are not required, but portals created by the game will always include them, resulting in 4 free/extra obsidian. The obsidian can be placed in any manner, e.g. by placing mined obsidian or by casting it in place using lava and water. Adjacent nether portals can share obsidian blocks. It cannot be built horizontally like an End Portal.

Once a frame is constructed, it is activated by fire placed inside the frame. This creates portal blocks inside the frame, resembling a vortex. The fire can be placed in any manner, including use of flint and steel or a fire charge, impact of a ghast or blaze fireball, or natural spread of fire to flammable material adjacent to the portal. Nether portals cannot be activated in the End.

When a portal is used, if no corresponding portal within range exists in the other dimension, one is created there: see § Portal search and creation.

When a player in the Overworld or the Nether stands in a nether portal block for 4 seconds, the player is taken to the other dimension. The player can step out of a portal before it completes its animation to abort the teleport. However, in Creative, there is no wait time - the player will immediately transfer between dimensions. If there is already an active portal within range (about 128 blocks) in the other dimension, the player will appear in that portal. Otherwise, a portal will be created at or near the corresponding coordinates. If a portal is deactivated, and the matching portal in the other dimension is used before it is re-activated, a new portal may be created (unless there is another active portal within range). The usual case for this is a when the player's Nether-side portal is deactivated by a ghast, and then the player dies in the Nether, spawns and then re-enters the Nether through the Overworld-side portal. However, multiple portals can be exploited to farm obsidian.

Most entities can travel through portals, including mobs (except the wither and ender dragon), thrown items, and transportation without passengers (neither mobs nor player), including boats, minecarts and horses. Storage minecarts and powered minecarts can pass through. Note that in the Legacy Console Edition, wolves will not travel through portals after a player but can be pushed through.[verify] Thus, inter-dimensional railways are limited to cargo. Note that mobs have a much longer "cool-down" time than the player, so they can't go back for 300 game ticks (15 seconds), by which time they likely will have wandered or been led away from the portal. If the chunk on the other side of the portal is not loaded, entities passing through (including projectiles) will effectively be held in suspended animation until the chunk is loaded.

When a player leaves a dimension, the surrounding chunks in the origin area get unloaded, unless there's another player nearby to keep them loaded. This effectively stops time in the origin dimension, until a player returns and the chunks are reloaded. This affects all ongoing processes, including animal and plant growth, furnace smelting, brewing, and even primed TNT. This also means that when dying in the Nether (and respawning in the Overworld), your items will remain (lava and fire notwithstanding) until 5 minutes after that chunk of the Nether is loaded again.

Portal linkage between Overworld and Nether

The Java floor() method used in these conversions rounds down to the largest integer less than or equal to the argument (toward smaller positive values and toward larger negative values), so a coordinate of 29.9 rounds to 29.

In the Legacy Console Edition, the ratio depends on the world size: 1:3 for classic (which includes all worlds on PS3 and Xbox 360) and small worlds, 1:6 for medium, and 1:8 for large.

Portals do not permanently "remember" what portal they are linked to in the other dimension, but instead perform the following whenever a portal is used by a player:

First, if the portal block in which the player is standing has been used recently, then it will re-use the destination that was chosen the last time; in this sense, portals do "remember" their linked pairs, but only for about 15 seconds (300 game world ticks, or 150 redstone ticks). One side effect of this behavior is that the cached destination is not validated before being re-used, so if a player travels through a portal and immediately deactivates it on the other side, other players can still follow them through for the next 60 seconds and appear at the same destination, even though there is no longer an active portal there. After 60 seconds have passed without anyone using the same origin portal, the cached destination will expire.

If the player's origin portal has not been used recently, then a new destination will be computed. First, the game converts the entry coordinates into destination coordinates as above: The entry X- and Z-coordinates are multiplied or divided by 8 (or 3) depending on direction of travel, while the Y-coordinate is not changed.

Starting at these destination coordinates, the game looks for the closest active portal. It searches a bounding area of 128 horizontal blocks from the player, and the full map height (128 for the Nether, 256 for the Overworld). This gives a search area of 257 blocks by 257 blocks, at the full height of the dimension being traveled to.

An active portal for this purpose is defined as a portal block which does not have another portal block below it; thus, only the lowest portal blocks in the obsidian frame are considered. A single portal block generated in and placed using server commands would be a valid location.

If a candidate portal is found, then the portal will teleport the player to the closest one as determined by the distance in the new coordinate system (including the Y coordinate, which can cause seemingly more distant portals to be selected). Note that this is Euclidean distance, not taxicab distance. The distance computation between portals in range is a straight-line distance calculation, and the shortest path will be chosen, counting the Y difference.

If no portals exist in the search region, the game creates one, by looking for the closest suitable location to place a portal, within 16 blocks horizontally (but any distance vertically) of the player's destination coordinates. A valid location is 3×4 buildable blocks with air 4 high above all 12 blocks. When enough space is available, the orientation of the portal is random. The closest valid position in 3D distance is always picked.

If that fails, too, a portal is forced at the target coordinates, but with Y constrained to be between 70 and 10 less than the world height (i.e. 118 for the Nether or 246 for the Overworld). When a portal is forced in this way, a 2×3 platform of obsidian with air 3 high above is created at the target location, overwriting whatever might be there. This provides air space underground or a small platform if high in the air. In Bedrock Edition, these obsidian blocks are flanked by 4 more blocks of netherrack on each side, resulting in 12 blocks of platform.

If a portal is forced into water or lava, the liquid will immediately flow into the generated air blocks, leaving the player with no airspace. However, a glitch can prevent this water from flowing into the portal: if liquid would flow both vertically and horizontally into the air pocket, it instead flows only vertically, so the blocks on the platform's outer corners never become water source blocks.

Issues relating to "Nether portal" are maintained on the bug tracker. Report issues there.