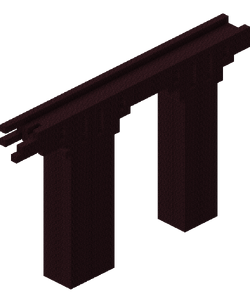 A nether fortress, or simply fortress, is a large complex of bridges, corridors, and towers found in the Nether.

Nether fortresses can generate buried in netherrack. In such a case, the interior is not filled with netherrack; all hallways and passages are clear except for open walkways and bridges. It is possible but rare for glowstone, crimson trees, and warped trees to generate inside the fortress pathways.

Nether fortresses are large complexes, composed of nether bricks materials, that are supported by massive pillars that tower high above the lava oceans. The fortress generation starts with a plain four-way crossing centered at chunk coordinates 11, ~, 11 of the designated chunk. A fortress has two areas, an exterior area of open bridges and an interior area of enclosed corridors. Both the bridges and corridors can end in a "broken" structure or may simply end without elaboration. Fortresses can tunnel through netherrack, giving the "exterior" areas an appearance of tunnels with nether brick floor and netherrack walls and ceilings. At broken sections the terrain is not cleared, which may create a tunnel that leads straight into a wall of netherrack.

The exterior consists of:

The interior of the structures have 1×2 windows with nether brick fences as the windowpanes. The fences also form gate-like structures at the entrances of some rooms and corridors. Rooms include:

Fortresses use a list of possible mobs to spawn that is separate from the rest of the Nether, regardless of the biome the fortress generates in. This includes zombified piglins, skeletons and magma cubes, as well as two exclusive mobs not found anywhere else: blazes and wither skeletons.

In Java Edition, the spawning algorithm has two checks:

If either check passes, it uses the special mob list for fortresses rather than the list for the biome when choosing the mob to spawn. The actual mob spawning proceeds as normal for the mob chosen from this list.

In Bedrock Edition, instead of spawning anywhere within a structural bounding box, mobs spawn only on the northwest corner of various blocks scattered few and far between throughout the fortress. In order to identify these spawning spots, glass panes must be placed all over the fortress at the second block up from the ground.

Mobs spawn at a much higher rate if the fortress is surrounded by soul sand valley or warped forest biomes, as hostile mobs in these biomes (ghasts, skeletons, endermen) spawn much less frequently, allowing most hostile mobs to spawn in the fortress.[1]

Fortresses generate nether fortress loot with chests in the indoor sections placed at some corridor turns.

Issues relating to "Nether Fortress" are maintained on the bug tracker. Report issues there.