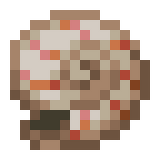 A nautilus shell is an item that is used for crafting conduits.

Nautilus shells can be rarely obtained as a treasure item from fishing. The drop chances of nautilus shells slightly increase with each level of Luck of the Sea on the player's fishing rod.

Wandering traders may sell a nautilus shell for 5 emeralds each.

In Bedrock Edition, a nautilus shell is one of the few items that can be held in the off-hand.

Issues relating to "Nautilus Shell" are maintained on the bug tracker. Report issues there.