Edit
watch 28:07
Minecraft Interactive Experience
Do you like this video?
Play Sound
Nausea 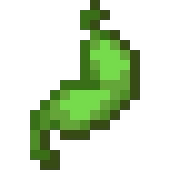 Nausea is an effect that warps and wobbles the player's vision similar to a nether portal. The effect does not change its power as its potency changes. It can be obtained only from eating a pufferfish. Drinking milk removes the effect. In Bedrock and Education editions, it can also be cured with tonic.

Nausea causes the player's vision to warp and wobble, with the distortion ramping up and down at the start and end of the effect. Although Nausea can be given in the normal range of levels, the level has no impact; it does not increase the distortion.

Nausea is affected by the "Distortion Effects" option under video settings or accessibility settings. As the distortion effects values is lowered, the nausea effect is increasingly replaced by a green screen effect around the edges of the screen. At lower values the warp and wobble effect is lesser and the green overlay effect is greater, and vice versa. At 100%, the green overlay is entirely disabled, and at "Off" (0%), the distortion is entirely disabled.

The effect can be removed by drinking milk. In Education and Bedrock editions when education options are enabled, drinking tonic also removes nausea.

Only boss mobs are immune. Although not immune, all other mobs are unaffected by Nausea as its effects are limited to purely visual changes to the player's screen. Entering mob view in spectator mode in a mob with Nausea does not show the distortion effects.