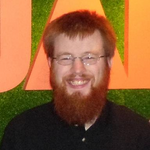 Nathan 'Tahg' Gilbert is a programmer who previously worked on the official Modding API for Mojang. He was one of the four main developers of Bukkit. He was hired on February 28, 2012.[1] On July 31, 2012, Gilbert announced over Twitter that he would no longer be working on Minecraft.[2] On August 1, 2012, Gilbert released his official statement on regards to his departure from Mojang.[3]

He is also a member of the Forgecraft server.