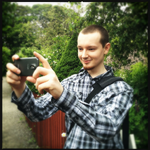 Nathan 'Dinnerbone' Adams is a technical director at Mojang Studios who worked on Java and Bedrock editions,[9] and its launcher. A member of the Bukkit team, Adams was hired by Mojang on February 28, 2012 to develop the mod API.[10][11] His first day at the Mojang office was March 27, 2012,[12] shortly before the first development snapshots for version Java Edition 1.3.1.

A common trope attributed to Dinnerbone is that he is commonly displayed as being upside-down.[13][14] His Twitter avatar is flipped[15] and his user model, as well as any mob named "Dinnerbone", is rendered upside-down.[14]

In October 2015, he announced that he would be "taking a break from Minecraft PC development for a few months."[16] Later, in February 2016, he further elaborated that though he would continue on other projects at Mojang, he had left the Minecraft team.[17][18] During this time, he worked on the 2017 native launcher. On February 6, 2017, Dinnerbone confirmed he had rejoined the Minecraft team.[19]

Nathan Adams is originally from Shrewsbury, United Kingdom.[20] He says he learned programming through creating MSN bots at age 10.[6][21] After finishing secondary school, Dinnerbone was rejected from college,[22] so he found a job with a tiny web development company, but was made redundant after a few years. Shortly after starting Bukkit, Dinnerbone was hired by Curse where he worked until joining Mojang Studios.[23] Aleksandra Zajac (MissMarzenia) is his fiancée.[24] He announced on August 24, 2016 that he and Aleksandra were expecting a baby boy.[25][26] The baby was later born on October 2, 2016.[27]