Edit
watch 28:07
Minecraft Interactive Experience
Do you like this video?
Play Sound
Not to be confused with Nylium.
Mycelium 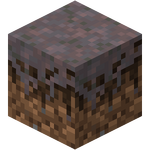 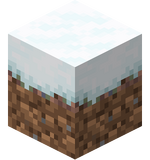 Mycelium is a particularly rare variant of dirt that is found naturally only in mushroom fields biomes. It has a particle effect that resembles tiny spores being released constantly from the surface.

Mycelium can be obtained by mining it using a tool with the Silk Touch enchantment. If mined with any other tool or by hand, it drops dirt. A shovel is the fastest tool to collect it.

Endermen can pick up mycelium blocks, and drop the block they are holding if killed.

A mycelium block can spread to any dirt block within one space above, one sideways, or three down. The mycelium needs light level 9+ above it, while the dirt needs light level 4+ above it, and must not be covered by any light-impeding block or any opaque block. Mycelium reverts to dirt when covered by one of the light-impeding blocks above and the light level at that block is below 4. The death and spread behaviors are checked when a random tick lands on the block.

If there is a plant on a dirt block when mycelium spreads to it, the plant pops out and drops as an item.

Mycelium can be turned into dirt path by using any type of shovel on it.

Issues relating to "Mycelium" are maintained on the bug tracker. Report issues there.