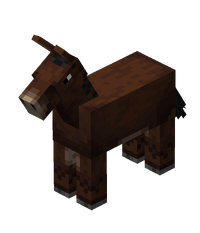 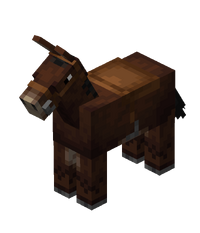 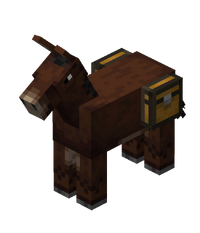 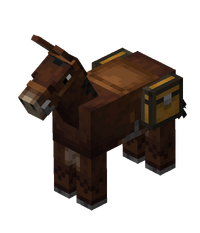 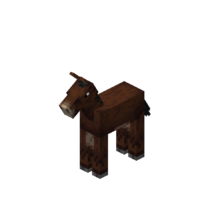 A mule is a tameable mob that can be ridden when tamed.

Mules do not spawn naturally, but they can spawn through cross-breeding a horse with a donkey. Mules cannot breed with other mules. 20% of mule spawn eggs produce foals.

Mules are the offspring of horses and donkeys and are closer to (but not quite) the size of a normal horse. Their ears, coats, and manes are like those of a donkey, though mules' coats are darker and reddish-brown. Like donkeys, mules cannot be equipped with armor but can be equipped with chests. Mules cannot have foals, much like mules in real life.

Unlike almost all other mobs, mules with equipped saddles or chests do not render these when under the effect of Invisibility.[1]

If equipped with a chest or saddle, they drop those items, as well as any contents of the chest.

Mules can be equipped with chests and used as pack animals.

They can be pulled along and tied up using a lead, and can be towed, swimming behind a boat by using a lead.

Equipment can be placed on a mule by holding it and then right-clicking on the mule, or by accessing its inventory. A mule's inventory can be accessed by mounting the mule and opening the player inventory or by sneaking and then right-clicking on the mule. A mule starts out with just a saddle slot, but if it is given a chest, it acquires 15 more inventory slots that can hold anything the player wishes.

Chests can be given to a mule by using it with the chest in hand, and the chest cannot be removed except by killing the mule. Upon death, the mule drops the attached chest and its contents.

Once a mule is tamed and saddled, the player can control it with standard directional controls, jump, and the mouse. The player dismounts using the dismount control.

A player can use any item while riding a mule, including drinking or throwing potions; activating doors or redstone devices; using chests, crafting tables, and furnaces; breaking and placing blocks (although it is slightly slower); and attacking with melee weapons or bows.

A ridden mule automatically runs up any one block high slope. The mule and rider can safely fit through a space as low as 2.75 blocks high. Lower clearance risks suffocating the rider if the rider's head enters a non-transparent block. The mule itself can enter gaps as low as 1.625 blocks high, but may itself take suffocation damage when clearance is less than 1.75 blocks. Mules cannot fit through a 1-block-wide gap.

A ridden mule can be made to jump and holding the control charges for a higher leap. Mules are not affected by jump boost beacons or potions. The standard dismount control dismounts from the mule, as does going in water deeper than two blocks. Just like the player, mules take fall damage when falling from heights.

All mules roam idly, occasionally stopping to rear, swish their tails, or lower their heads as though eating the grass. Unlike sheep, the eating animation does not actually cause any grass to be consumed. Mules turn to look at any player that comes near. Any mule, even a wild one, allows itself to be attached to a lead without protest. However, if the player attempts to saddle an untamed mule, it rears and flails its front hooves.

Mules, like most mobs, can ride in a minecart and boat. Unlike other passive mobs, mules slowly regenerate health.

Adult mules can be tamed: with an empty hand, mount the mule repeatedly; when it no longer bucks the player and shows hearts, it is tamed. It is necessary to tame a mule in order to give it equipment or ride it for any length of time.

Taming depends on the mule's "temper". Mules begin with a temper of 0 out of 100. When a player is riding the mule, a random number between 0 and 99 is chosen. The mule becomes tame if this number is less than the temper, otherwise, the temper is increased by 5 and the player is bucked off. Temper can also be increased by feeding the mule.

While riding an untamed mule, a galloping sound is audible, more or less rapid to give a general idea of the mule's speed. It is unknown whether there is any indication of jump height before taming.

Like all tame animals, a death message is displayed to their owner if they are killed.

Like their real-life counterparts, mules in Minecraft cannot produce offspring. The only way to produce a mule (other than using a spawn egg) is to cross-breed a horse with a donkey.

Feeding a mule food can alter its behavior, cause it to grow (if it is not yet an adult; foals normally take 20 minutes to fully mature if not fed), and/or restore its health. The table below lists the effects of the various foods mules eat.

To feed a mule, hold a valid food item and press use on the mule. If the food is invalid, the player simply mounts the mule. Mules can be fed only when feeding would have an effect, similar to other animals.

Mules have three "equine stats" that vary from mule to mule: health, (maximum) movement speed, and jump strength. These stats are created once the mule is born or spawned, and are not affected by food.

When spawned in any way except breeding – for instance, using commands or using spawn eggs – mules are assigned their stats within certain ranges, specific according to their horse type.

Spawned mules' speed is always 0.175; the player's normal walking speed is 0.1. The speed listed does not include any status effect that affects the speed of a horse or a player. Bred mules have speed based on their parent's speeds, like all other horse breeding.

Spawned mules' jump strength is usually 0.5, which is enough to clear 1 9⁄16 blocks. Other jump strengths can be found in bred mules, depending on the statistics of the parents (as explained later).

When breeding a horse and a donkey, the foal's stats are determined by averaging both parent's stats with a third set, randomly determined as horses' stats are (i.e. add both parents' stats with the random value and divide by 3). Any value for speed and jump strength applicable for a horse spawned naturally or with a spawn egg can be used for the third set.

Mules have entity data associated with them that contain various properties.

Issues relating to "Mule" are maintained on the bug tracker. Report issues there.