From Minecraft Wiki
Jump to: navigation, search
This article is about the biome. For the structure, see Terrain features § Mountain. 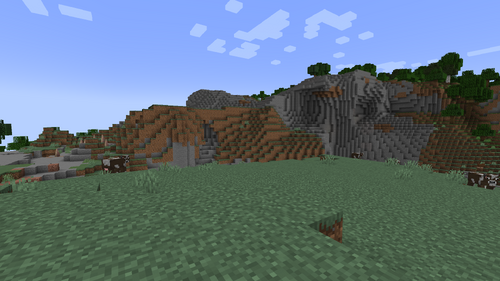 Mountains or extreme hills are common cold biomes. There are four (nine ‌[upcoming: BE 1.18.0]) used variants and one unused variant in the biome family.

Mountain biomes feature steep terrain and reach higher elevations than any other biome in the game other than the shattered savanna biomes. The surface is made of grass block, stone, ores and gravel. The standard mountains biome generally peaks at roughly Y-level 140. As the climate is cold, rainfall changes to snowfall above approximately Y-level 92 where stacked snow layers form on blocks above that point, along with water freezing into ice. The grass and leaves are an aqua color. Llamas may spawn in mountain biomes; they are the only places where llamas can spawn aside from savannas. Additionally, emerald ore exclusively generates in mountain biomes and infested stone patches generate below sea level.

Mountain biomes have some unusual features and formations compared to other biomes due to the terrain generation algorithm.

Floating blocks and even small floating islands are common, as are overhangs and large waterfalls (occasionally, even lavafalls). This can create some impressive views at times. These oddities are magnified in shattered savannas.

Survival in mountain biomes can be challenging to beginners, due to the heights often risking heavy fall damage and higher elevations bringing snow and ice, but can be fairly easy once the player has acclimated to the area and found a flat-enough space is found or made for shelter. Llamas can also serve as useful pack animals when tamed. Water must be protected by light or a roof to prevent it from freezing when above the snowfall line, however, and the player must be aware of their surroundings to avoid falling off steep cliffs, especially when fighting hostile mobs. Care should also be taken when mining in mountain biomes, due to infested stone occasionally generating; the player might get swarmed with silverfish if they're not prepared.

Mountain biomes generate within clusters of lush and cold biomes, commonly found next to taiga, forest, or plains biomes.

There are a total of five (ten in Bedrock 1.17.0) mountain variant biomes, including one whose generation has been discontinued in new worlds.

The mountains biome is the normal mountain variant. This biome features the standard stony and grassy terrain (with sporadically generated oak and spruce trees‌[JE only]).

As in most mountain variants, llamas can spawn here, and silverfish-infested blocks and emerald ore generate naturally.

The wooded mountains generate groves of oak and spruce trees. This variant does not feature the stony terrain so that the trees can generate. This biome also generates standalone as a thick separation when a desert is bordering a snowy biome.

While the increased wood supply can be useful, the risk of fatal fall damage still exists, especially if this variant generates on the edge of a mountain range and border a river or another low-elevation biome.

Wooded mountains use the same mob spawning chances as mountains.

The rare gravelly mountains variant replaces the top few layers of stone and grass with gravel across its landscape.

Due to the gravel replacing most of the grass, trees generate far less often, making this variant relatively barren. Players should be careful when surfacing from underground in this biome, as the top layers of gravel can pose a suffocation hazard.

Gravelly mountains use the same mob spawning chances as mountains.

Gravelly mountains+ is a rare variant that is similar to the gravelly mountains. The peaks are still covered in gravel, but large valleys often generate among the peaks. Differently, it also generates standalone as a thick separation when a desert lakes biome is bordering a snowy biome. The trees are still quite sparse in this biome, making this a difficult biome for survival, due to its barrenness being combined with steep terrain.

Gravelly mountains+ use the same mob spawning chances as mountains.

The mountain edge variant is a currently unused variant. Similarly to the jungle edge biome, it was a technical biome intended to provide a smooth transition from other biomes to the mountains. It is similar to the taiga hills biome, but with a few oak trees. The terrain was gentler and not as steep as the normal mountains, with oak and spruce trees growing. This biome was phased out in the Java Edition 1.7.2 update development and does not generates naturally, though can still be seen using the Buffet world option‌[Java Edition only] or addons.‌[Bedrock Edition only]

Mountain edges use the same mob spawning chances as mountains.

This section contains content on features that are part of Experimental Gameplay in Bedrock Edition.
These features may be properly added in a future update, but requires the "Caves and Cliffs" option toggled to be enabled in the current version.

This section describes a feature planned for Java Edition.
It has not appeared in any development versions yet, but is planned to be included in Java Edition 1.18.

There are 5 additional height-dependent sub-biomes which make up a mountains biome. Several biomes can occupy the same X and Z coordinates, varying only along the Y level. Coal, iron, and emerald ores can be found at higher altitude than other biomes. These biomes are bordered by forest or flower forest and do not generate stone shores when next to an ocean (forest will just cut to ocean instead). These new mountains generate with either plains, desert, forest, jungle, ocean, or snowy tundra as base biomes, which result being connected or even completely surrounded by those biomes.

The mountain meadow generates between about Y-level 100 to 140 on a mountain. Sweet berry bushes can be found here, as well as cornflowers and dandelions. Trees do not naturally generate here.

The mountain grove generates from about Y-level 110 to 140 on a mountain, and creates a forest of spruce trees on the lower slopes of a mountain. Rabbits spawn in this biome. The surface is also covered with snow, snow blocks and powder snow.

The snowy slopes generates from about Y-level 140 to 170 on a mountain. It is also covered in snow, snow blocks and powder snow, plus a bit of Ice. Goats spawn only in this biome.

The lofty peaks is one of the two highest mountain biomes, which generates above Y-level 170 on a mountain. Whether the lofty peaks or snow capped peaks biome generates depends on temperature. This biome will only generate on mountains that are tall enough to generate it. This biome is covered with snow and ice blocks.

The snow capped peaks is one of the two highest mountain biomes, which generates above Y-level 170 on a mountain. Whether the lofty peaks or snow capped peaks biome generates depends on temperature. This biome will only generate on mountains that are tall enough to generate it. This biome is not only covered by even more snow and ice, but packed ice as well.

This section is missing information about 1.17 and 1.18.
Please expand the section to include this information. Further details may exist on the talk page.

|At this time mountians were considered structures and randomly generated as part of the world generation algorithm.}}

Issues relating to "Mountains" are maintained on the bug tracker. Report issues there.