Edit
watch 28:07
Minecraft Interactive Experience
Do you like this video?
Play Sound
Not to be confused with Mossy Cobblestone.
For the carpet-like block, see Moss Carpet.
Moss Block 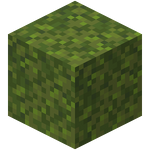 A moss block is a natural block that can be spread to some other blocks by using bone meal.

Moss generates on the floor and ceiling within the lush caves biome.

Moss blocks can be obtained by trading with a wandering trader, who may sell 2 moss blocks for 1 emerald.

Moss blocks can be mined using any tool or by hand, but a hoe is the fastest way to break it.

In Java Edition, using bone meal on a moss block causes nearby blocks with the base_stone_overworld, cave_vines and dirt tags to be converted to moss blocks.[more information needed for Bedrock Edition]

Moss spreads to any blocks with air above them in a corner-less 7×11×7 volume centered on the original moss block. Foliage can replace air on any of these blocks.

Using bone meal on moss blocks causes certain types of adjacent blocks to be replaced with moss blocks. To allow moss to spread to them, blocks need to have air above.

Additionally, grass, moss carpets, azaleas and flowering azaleas grow on moss blocks in range, if there is air above them.

A moss block drops as an item when a piston pushes it.

Placing a moss block into a composter has a 65% chance of raising the compost level by 1.

Issues relating to "Moss Block" are maintained on the bug tracker. Report issues there.

This section would benefit from the addition of more images.
Please remove this notice once you've added suitable images to the article.