From Minecraft Wiki
Jump to: navigation, search
For mobs in spin-off games of Minecraft, see Minecraft Earth:Mob and Minecraft Dungeons:Mob. 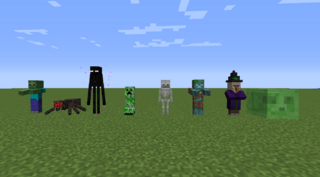 Some of the many monsters that can spawn in the overworld. From left to right: Zombie, Spider, Enderman, Creeper, Skeleton, Drowned, Witch, Slime.

A mob is an AI-driven game entity resembling a living creature. The term "mob" is short for "mobile".[1] All mobs can be attacked and hurt (from falling, attacked by player or another mob, falling into the void, etc.), and have some form of voluntary movement. Different types of mobs often have unique AI and loot. 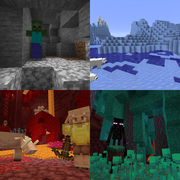 Different mobs spawn in diverse habitats/structures, depending on the light level, biome and surface material.

Mobs spawn in various ways. Most mobs spawn naturally, depending on the light level, biome, and their surroundings. For example, most animals are found in bright areas on the surface, whilst hostile monsters are commonly found in the dark (whether if it’s a cave, dungeon, mansion or at night). Animals usually spawn upon chunk generation, while hostile monsters spawn and despawn in certain radii around the player. Some mobs including passive and neutral animals, and even hoglins have the ability to be bred by the player, creating offspring. Villagers also breed randomly depending on the time of day and the number of beds (though they can’t be directly bred by the player). Most mobs never spawn on transparent blocks, in water (except fish, dolphins, turtles, and other aquatic creatures), in lava (except for striders), on bedrock, or on blocks less than a full block tall (such as slabs placed on the bottom half). The exception is monster spawners, from which monsters can spawn naturally on any block including air.

Some mobs (like the snow golem, and the wither) require that the player needs to "construct" them before being able to spawn. The iron golem can spawn naturally and can also be constructed. The ender dragon can be respawned with 4 end crystals.

Many mobs despawn (cease to exist) after a certain amount of time if far enough from the player. In Java Edition, most passive mobs do not despawn, while most hostiles do. In Bedrock Edition, almost all passive or hostile mobs despawn.

Mobs are affected by the environment in the same ways as the player: they are subject to physics, and they can be hurt by the same things that harm the player (catching on fire, falling, drowning, attacked by weapons, /kill, etc.). Some mobs may be resistant or immune to certain hazards, such as Nether mobs, which are immune to fire. Mobs like cod, salmon, tropical fish, pufferfish, drowned, guardian, elder guardian cannot be drowned. Mobs can ride minecarts and other mobs can climb up ladders. When mobs are killed, they turn to dust and drop items that may be useful resources. Each type of mob in Minecraft has a certain AI (Artificial Intelligence) system with different behaviors and mechanics. Mobs ordinarily wander around at random if there is a player nearby and usually avoid walking off blocks high enough to cause falling damage. Many mobs have an advanced pathfinding system that allows them to navigate through obstacles to get to a desired object or destination. Passive mobs flee in random directions after being hurt, while hostile mobs face and chase/attack the player as soon as the player comes close. Neutral mobs remain neutral until a player or mob provokes it (usually by attacking), at which point the neutral mob becomes hostile toward and attack the entity that hit it. Most mobs are aware of players within 16 blocks of them, but some can see farther. Conversely, most mobs can be heard by players up to 16 blocks (spherical) away.

Most mobs cannot see through most solid blocks, including semi-transparent blocks such as ice, glass, tall grass, or glass panes. Mobs do not attempt to walk on rail tracks unless pushed on by other mobs.

Mobs are listed and classified by their nature from the player's perspective. For more details on a particular mob, click on them to view their individual page.

Passive mobs are harmless mobs that do not attack the player, even when provoked or attacked. Most of them are breedable and/or tameable.

Neutral mobs are sometimes passive and sometimes hostile toward the player. Many neutral mobs become hostile only when attacked first, but other neutral mobs have other ways of being provoked. Some may be naturally hostile with provocation.

Hostile mobs are dangerous, aggressive mobs that always attack the player within their respective detection ranges.

Boss mobs are special hostile mobs that are distinctly more dangerous and tougher than other mobs. They do not spawn randomly, and are confronted intentionally. They also have a boss bar featuring their name and health. Boss mobs provide unique challenges but also equivalent rewards. Some players also consider elder guardians, ravagers, evokers, piglin brutes, Skeleton Horsemans and illusioners as mini bosses, even though they don't have a bar.

Only contains a few mobs that never spawn naturally in-game as they can only be summoned with the /summon command though the zombie horse can also be spawned in with a spawn egg.

Removed mobs no longer exist in current versions of the game.

Mobs that were added as a joke for April Fools' Day in Java Edition.

Mobs that have been announced by Mojang as confirmed future additions.

Mobs that were announced by Mojang as confirmed or potential future additions, but either got replaced by other mobs or scrapped.

This section describes an education-related feature.
This feature is available only in Education Edition or when enabling the "Education Edition" option in Bedrock Edition.

Mobs that are exclusive to the Education Edition.

Some mobs are weak or immune to certain kinds of damage. Sea creatures, such as turtles, take more damage from tridents that are enchanted with Impaling.‌[Java Edition only]‌[until JE Combat Tests] Skeletons and their variants are immune to drowning. All undead mobs are healed by Potions of Harming, but take extra damage from weapons enchanted with Smite, along with taking damage from Potions of Healing. Many of these weaknesses and immunities are a result of what category (see below) of mobs that the mob falls into.

A dying zombie.
For the mob class in Minecraft Dungeons, see MCD:Undead.

This group of mobs includes drowned, husks, phantoms, skeletons, skeleton horses, strays, withers, wither skeletons, zoglins, zombies, zombie horses, zombie villagers, and zombified piglins. These mobs are damaged by potions of Healing, healed by potions of Harming, and are immune to drowning (except for husks and zombies) and poison damage. Zombies, zombie villagers, drowned, skeletons, strays, and phantoms burn when under direct sunlight, unless they are touching water or wearing a helmet. Under the fire resistance effect, undead mobs still catch fire in direct sunlight but do not get hurt by the fire. All undead mobs except for drowned, phantoms, and withers sink in water. All undead mobs take extra damage from weapons enchanted with Smite,‌[Java Edition only] and are ignored by withers.

Most undead mobs have the ability to pick up items. Some can spawn wearing armor, or holding tools or weapons.

This group of mobs includes axolotls, dolphins, squids, glow squids, guardians, elder guardians, turtles, cod, salmon, pufferfish, and tropical fish, but not drowned.[4] They take extra damage from tridents enchanted with Impaling,‌[Java Edition only]‌[until JE Combat Tests] and do not cause pufferfish to inflate nor take damage from them. All aquatic mobs except dolphins are immune to drowning, and all except guardians, elder guardians, and turtles take suffocation damage if out of water for too long. Aquatic mobs have the ability to swim, whereas other mobs simply float on water or sink. In Bedrock Edition there is no in-game classification for these mobs.

A spider.
For the mob class in Minecraft Dungeons, see MCD:Arthropod.

This group consists of mobs based on arthropods, namely bees, cave spiders, endermites, silverfish, and spiders. They take extra damage and receive the Slowness IV effect when attacked with weapons enchanted with Bane of Arthropods.

This group includes pillagers, illusioners, evokers, vindicators, and ravagers‌[Bedrock Edition only]. They are immune to evoker fangs damage and ignored by vindicators named "Johnny". They are hostile toward villagers, wandering traders, iron golems and players in Survival or Adventure mode. Witches, and vexes may accompany them in raids. Illusioners (and witches‌[Bedrock Edition only]) can see players or targets through blocks. Vindicators named "Johnny" attack ravagers, as they are not illagers‌[Java Edition only].

Some non-boss mobs resist a percentage of knockback from attacks.

This section needs to be updated.
Please update this section to reflect recent updates or newly available information.
Reason: Add damage by Goat and possibly add damage for passive mobs (fox and axolotl).
The damage mobs deal to players is affected by the difficulty of the game. The below values represent the amount of damage taken per hit.

Advancements are made when a player accomplishes something that is either rare to accomplish or sometimes easy to do so (such as Adventure for killing or getting killed by an entity).

Issues relating to "Mob" are maintained on the bug tracker. Report issues there.