It has been suggested that this page be moved to Missing content or missingno.
If this move affects many pages or may potentially be controversial, do not move the page until a consensus is reached. [discuss]
Reason: Generalize page for all missing content. For missingno is id name for missing splash, texture, NBT tag, and other data. It's also short and catchy name.
When moving, be sure to use the appropriate tool instead of simply copying and pasting the page's contents, to preserve edit history.
"missingno" redirects here. For the error-handling splash text, see Splash. For the error case for the CanBreak/CanPlaceOn item tag, see Tutorials/Command NBT tags.

Minecraft makes use of missing textures and missing models to handle potential errors present in the game's resources as well as resource packs.

This section is missing information about A solid magenta texture may be possible somehow:
Please expand the section to include this information. Further details may exist on the talk page. 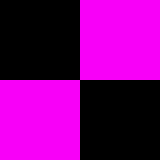 The missing texture is a placeholder texture used by Minecraft for handling cases where a suitable texture cannot be found. Outside of its use in missing models, this is almost always due to a texture being referenced which simply does not exist under that name.

The texture is not intended to appear in vanilla gameplay, and cases where it does are due to misconfigured resource packs.

As of Java Edition 21w42a, there are six ways in which the missing texture can appear without using a resource pack, all of which require commands:

When the game has to use the missing texture, such uses are generally announced in the game's output log:

History of the texture itself[]

The missing texture used in these versions would be generated differently depending on the operating system and Java version.[9]

This section is missing information about Console output when a model is missing or invalid.
Please expand the section to include this information. Further details may exist on the talk page. 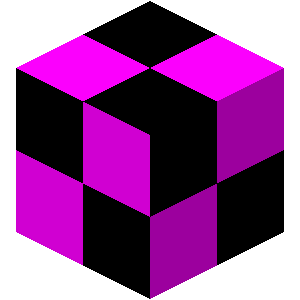 By default, the missing model is a full 16x16 cube which uses the missing texture on all six faces. These faces are culled accordingly where possible. Only two faces will have the same color at each vertex, rather than the three one may expect; Mojang have decided to not fix this.[31]

The missing model is obviously also never intended to appear in standard gameplay, and uses the missing texture again to appear prominent and highlight errors to fix.

Contrary to popular belief, no central "missing texture block" has ever existed in the game; all cases of blocks which use this model are due to another block simply having no assigned texture or model.

History of the model itself[]

This section is missing information about "equipped on head" history.
Please expand the section to include this information. Further details may exist on the talk page.

Examples of cases where the missing model is not used[]

This section is missing information about How do bells work here?.
Please expand the section to include this information. Further details may exist on the talk page.

By definition, any block which does not use a model does not use the cubic missing model. If a model is still not defined for the block, however, this will likely still reflect in the block's particles.

Horses are a particularly interesting example of an entity which are discussed further in a later section. In multiple version ranges, certain invalid horses can either appear completely invisible or have a solid white texture, neither of which are the missing model.

From 14w25a up to 19w38b, there existed a remarkable visual bug where missing models associated with blocks that used translucent rendering (such as ice, stained glass, stained glass panes and slime blocks) would interact anomalously with the rendering of transparent blocks in the world, as well as of entities, including the holder. Unlike normal missing models, translucent blocks and other entities would render in front of such a model when held, even if they were physically farther away from the camera. However, this only applies if the distant entity or transparent block in question is not first occluded by the player model. As a result, the held translucent block can form a player-shaped silhouette around the player model in front of a background made of entities (such as paintings) or translucent blocks.

This effect can be seen without the use of resource packs up to 17w46a simply by holding ice, stained glass, stained glass panes or slime blocks of an invalid data value. For versions 17w47a up to 19w38b a resource pack is required to break the model of an existing translucent item, and from 19w39a the bug is no longer present at all.

This effect also happened to particles and certain other objects in-game from 13w41a onwards.

If a sufficiently broken resource pack is loaded, the game will catch such resource packs and unload them automatically if errors were detected. From 17w43a up to the full release of 1.13, this also included the default resources, meaning that applying a flawed resource pack would result in all assets being unloaded, and as such the missing error assets appearing everywhere.

From 18w30a onwards, the game was made to unload all resource packs except the default resources in cases like these.[34]

Certain game objects do not use textures in the standard way, instead layering them on top of each other. Horses use these for their pattern variants, and banners for each banner pattern. When there is no texture to pick from, these instead appear completely white. If the textures in question have already been loaded into the game, it is not possible to unload them even if all other textures are unloaded.

As shields use an item model, even though said item model points to an entity model, it appears as a missing model even though it makes use of texture layering.

Tropical fish, despite also using composite textures to distinguish variants, do not turn white if a texture cannot be loaded, and instead use the usual checkerboard (which is tinted in certain cases).

The screenshots below also demonstrate that player skins, despite not being layer-based, are also not unloaded due to not being resource pack dependent.

It is interesting to note how this bug highlights different changes to parts of the game through 1.13's development. Focusing on the main menu, for example, reveals multiple details: