From Minecraft Wiki
Jump to: navigation, search
This article is about the Legacy Console Edition mini games. For minigames in general, see Minigames. For the Bedrock Edition third-party servers, see Featured servers.

This feature is exclusive to Legacy Console Edition. 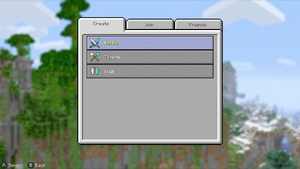 The Mini Games menu as seen on the Nintendo Switch Edition.

Prior to each round, all players can freely explore a lobby and interact with various items, such as bows, fishing rods, armor, heads, elytra, and music discs. Any player that wears one of the five heads in the lobby retains that head into the next round.

Always before going to the arena of a specific mode, the player respawns in the lobby. It is a small "arena" in the middle of a super flat world. All players on it are in adventure mode and are immune to any damage (just like in creative mode) (only the rods somehow moved another players). Being with other players, it is difficult to visit this place, because you only have 1 minute to start the game. The best way to do this is to enter the lobby yourself - then there will be no countdown as the system will wait for the next player to arrive.

Meaning and exploration The mini-game lobby is puzzling. There are many redstone puzzles on its territory. After solving any, a passage opens, the block moves etc. However, the main goal of the lobby is to collect all the music discs and the dragon's head.

Escape The goal of the players themselves was also to get away from him. In older versions this can be easily done with an elytra or a fishing rod, but officially in the final version and after fixing all the bugs there is absolutely no way out of this lobby. 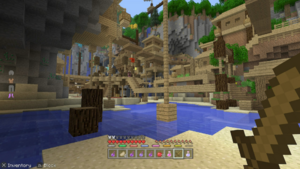 Initially codenamed/known as Arena (as seen in Wii U Edition's unused files), Battle is a Mini Game most similar to the popular "Hunger Games" mode on Java Edition servers, where players compete in a "last man standing" or "deathmatch" style game. Battle was added to the Legacy Console Edition on June 21, 2016. The gameplay of Battle differs from the standard "Hunger Games" mode in a variety of ways, such as:

Up to 16 players can join a single game on Xbox One Edition and PlayStation 4 Edition, 8 players on Xbox 360 Edition, PlayStation 3 Edition, Wii U Edition, and Nintendo Switch Edition, and 4 players on PlayStation Vita Edition. A "Casual" or "Competitive" option can be chosen when creating a lobby, which can either allow or restrict the use of smaller-sized skins and can change the appearance of spectators. Spectators cannot pass through blocks, but can fly through one block tall spaces. As of TU60 and equivalent updates, the totem of undying can be found in a map's center chests, commonly in the High Power mode, occasionally in the Food Central mode, and never in the Decayed mode.

Custom Battle is an option that allows a player to change various aspects of Battle, such as:

All loot in Battle Mini Game is obtained from chests or other players. Center chests at the beginning of a round may contain high concentrations of valuable loot, such as armor, weapons, food, and potions. Other chests in the map may also contain smaller amounts of valuable loot.

A chest in the Halloween map always contains the following items, regardless of the mode being used.

As of TU49 and equivalent updates, there are a total of 21 maps in Battle Mini Game (excluding the Nintendo Switch Edition). The first three maps - Cavern, Cove, and Crucible - can be used by anyone, however the remaining 18 maps must be purchased through the respective Battle Map Pack or the Season Pass (excluding the Nintendo Switch Edition). Each map is based on a theme, occasionally with unique music and a texture pack. Because of this, the texture pack cannot be changed during Battle Mini Game.

As of PlayStation 4 Edition 1.90, maps with the default textures were replaced with the newer "Minecraft Classic" pack.

The current available Battle maps are as follows, with the Nintendo Switch Edition only having access to Cavern, Cove, Crucible, and Valley:

The current available Battle Map DLC Packs are as follows, with the Nintendo Switch Edition having access to only the Chinese Mythology Mash Up Pack: 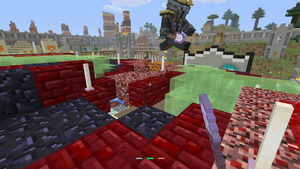 Tumble is a Mini Game most similar to the popular "Spleef" mode on Java Edition servers, where players aim to cause others to fall off of an arena by using snowballs, shovels, or other items to mine the ground below them. Tumble was added to the Legacy Console Edition on August 30 and August 31, 2016.

Similar to Battle, a Tumble game is divided into three rounds. The object of the game is to remove blocks from under other players, causing them to fall in a last-man-standing scenario. The default Tumble mode encompasses a single, large platform where players use shovels to remove blocks. Other modes include competing on three smaller platforms, throwing snowballs, using firework rockets, or throwing splash potions with the Levitation effect. All blocks are broken immediately by a shovel, snowball, or potion. The sole exception is TNT, which act as both a pitfall and an explosive that can be used to destroy lower platforms, if enabled.

Up to 8 players can join a single game on most platforms, with PlayStation Vita Edition allowing a maximum of 4.

As of TU58 and equivalent updates, the "Custom" game type allows the host to select the number of lives, the number and size of layers, and enable the use of firework rockets or splash potions of Levitation.

After a certain amount of time, Showdown mode begins, like in Battle mode. Player names are shown during this period. When shovels are enabled, they are replaced with snowballs.

Various special events can occur in the Tumble mini game: 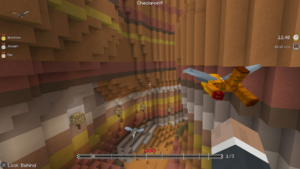 Glide is a Mini Game where players maneuver through a track while wearing an elytra, aiming to finish in the fastest time or score the most points by flying through colored rings. Glide was added to the Legacy Console Edition on March 29, 2017. Glide currently features three different game modes:

A Glide match is divided into three rounds, where a player with the fastest time or highest score from any round is the victor. Up to 16 players can join a single game on Xbox One Edition and PlayStation 4 Edition, 8 players on Xbox 360 Edition, PlayStation 3 Edition, Wii U Edition, and Nintendo Switch Edition, and 4 players on PlayStation Vita Edition.

As of PlayStation 4 Edition 1.90, maps with the default textures were replaced with the newer "Minecraft Classic" pack.

The current available Glide maps are as follows, with the Nintendo Switch Edition only having access to Cavern, Temple, and Canyon:

The current available Glide Map DLC Packs are as follows. None are available on the Nintendo Switch Edition: