Edit
watch 28:07
Minecraft Interactive Experience
Do you like this video?
Play Sound
Mineshaft 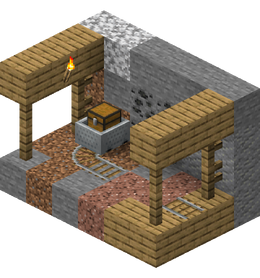 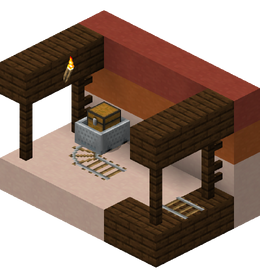 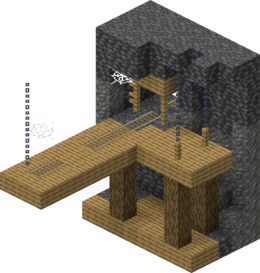 A mineshaft is a generated structure found underground or underwater, having mazes of tunnels with cave spiders and ores exposed on the walls or floor regularly.

Mineshafts generate in any Overworld biome, usually underground or rarely in oceans. They are generated before chunk features such as ores. Multiple mineshafts can generate near each other, producing larger complexes. As mineshafts intersect with caves and canyons, corridors generate a bridge of planks suspended under chains over empty space.

Mineshafts often generate on the surface in badlands biomes. Badlands mineshafts are composed of dark oak planks and fences with railways more complete above ground. Since badlands biomes generate gold ore often and at higher altitudes, they are good places to easily find gold.

In Java Edition, each mineshaft chest contains items drawn from 3 pools, with the following distribution:

In Bedrock Edition, each mineshaft chest contains items drawn from 3 pools, with the following distribution:

Issues relating to "Mineshaft" are maintained on the bug tracker. Report issues there.