This page would benefit from the addition of isometric renders.
Please remove this notice once you've added suitable isometric renders to the article.
The specific instructions are: Render with the model and texture of its fused and separated forms from the game
Wither Storm 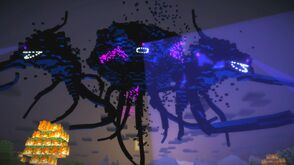 The wither storm or witherstorm is an enormous, advanced, wither-like mob that served as the main antagonist for the first four episodes of Season 1 of Minecraft: Story Mode.

It was created by Ivor through the use of the command block, three wither skeleton skulls, and soul sand. It was destroyed by Jesse's Gang in the conclusion of the fourth episode, "A Block and a Hard Place." It was programmed to follow Gabriel the Warrior's amulet. However, due to some mishaps, it became out of control and unstoppable, destroying everything in the way of the amulet.

How the wither storm was built.

When created, the wither storm appeared to be a regular wither with a command block within its chest. Though as it began to pull in the surrounding blocks, it quickly transformed into a gigantic, black creature with long, powerful tentacles along with three heads. Each head has one purple, glowing eye and a large set of mandibles. When it picks up blocks to build its body, they turn into an ash-like block that is absorbed into it. The interior is similar with the exception of purple and gray variants of the blocks or mobs it has absorbed.

While the Wither Storm still held some of the similarities as a normal wither, it contained a few enderman-esque qualities as well. This is likely either due to the Command Block being used to erase the ender dragon out of existence or withering being similar to the corrupted-like state the End represents. Some examples being the tractor beam being able to pull blocks and objects towards itself which can be compared to the abilities of the endermen picking up blocks. Both are able to manipulate a block's location without tools or breaking it. The wither storm's tractor beam and certain absorbed objects were also purple; the associated color of the End and corruption. It also has visual similarities to heart of ender from Minecraft Dungeons which was created after Minecraft: Story Mode.

At the end of "The Last Place You Look", the wither storm was split into three separate entities. They all had only one head, but later in "A Block and a Hard Place" each of them grew two more heads. Two of them were quite smaller than the main larger one who also had the command block within.

The wither storm is a very powerful creature. It gained its extraordinary capabilities with the help of the Command Block. Its powers were:

The list below shows the victims the wither storm has killed: