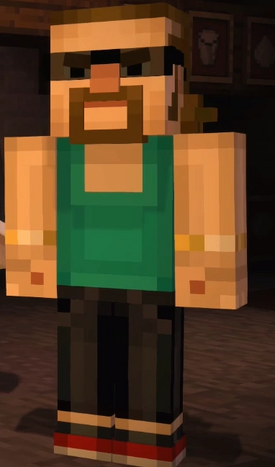 TorqueDawg is a supporting character that appears in "A Portal to Mystery" of Minecraft: Story Mode. He is voiced by Adam Harrington.

TorqueDawg is a muscularly built man who wears a sleeveless cyan shirt with black pants and red-gold shoes with black sunglasses. He also has long, brown hair and a beard.

TorqueDawg is portrayed to be a rude, prickly individual who doesn't respect anyone. He likes to make fun of others, is very loud, and loves showing off. He does enjoy those who laugh at his jokes. He also seems to be a liar since he was lying about a "rare item" (later revealed to be the enchanted flint and steel), that he allegedly had.

While TorqueDawg was talking to Jesse's Gang, the lights blacked out and TorqueDawg was shot with several poison-tipped arrows from a dispenser overhead. The trap was activated by The White Pumpkin.