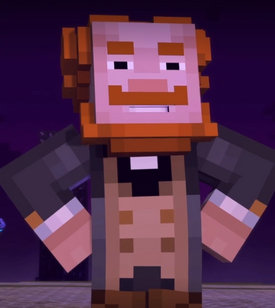 Soren the Architect, abbreviated to just Soren, is a tritagonist encountered in Minecraft: Story Mode. He is the leader of the Order of the Stone. He is renowned as a legendary architect, hence his name. He is voiced by John Hodgman. He first appeared in "The Order of the Stone" as a flashback and in "The Last Place You Look" as a character.

He is a pale man with ginger hair with a moustache and beard, who wears sandy colored armor with black accents. He has fingerless, grey gloves and brown pants. Prior to episode 3, he wore a grey hardhat and tan goggles.

Soren appeared to be an eccentric, impulsive, and a complete genius in his first few appearances. He is not good at socializing and seems to not care about lying. He was not above putting himself in danger to conduct his research in Endermen, risking his life to study them, and spoke of a desire to be anything other than Soren the Architect. He is the discoverer of the Command Block, and he grew to be dependent on it after realizing what it could do, becoming a coward in the process.

During his time in the End, Soren grew a fascination for Endermen, studying them and even attempting to train some on how to build. Furthermore, he prefers endermen more than anyone because unlike people, endermen always do what he expects without a single thought of betrayal, almost to a fault. In "A Block and a Hard Place", it is revealed that Soren even worries for the safety of Endermen when he sees a few of them approaching the Wither Storm, fearing that they will get themselves killed.

The list below shows the victims Soren has killed:

"I wasn't expecting so many houseguests! There's no way I have enough seashell soaps for all of them."
—Soren.

"Ask me no questions and I'll tell you no lies."
—Soren to Jesse.

"Sometimes, I'd prefer to be anything but Soren...ooh, like a donkey, for example."
—Soren.

"You look... terrible."
—Soren to Petra/Gabriel.

"You seem like a person who appreciates cool stuff that's cool for no reason."
—Soren to Jesse.

"Yes... yes, that's it! They'll be caught between a rock in a hard place!"
—Soren, talking about the plan to lure the Witherstorm with the Amulet. (Determinant)

"And to make matters worse, we've gone from one Wither Storm to three! Our plan was a total failure!"
—Soren.

"Tinkering with the Far Lands is nothing to laugh about!"
—Soren to Petra.

"It's as though Ivor learned nothing from my lectures on organizational methodology!"
—Soren to Jesse in Ivor's Lab.

"If you'd only been there... It was a fight for the ages! We'd spent weeks preparing for our greatest battle ever. But even so, the Ender Dragon was stronger than even I had imagined. I realized it was drawing strength from the Ender Crystals -- and that the crystals had to be destroyed. I hit the first with a perfectly placed arrow. The second, I destroyed by launching myself on the shockwave of Magnus' TNT! Using only my strength and my wiles, I steered the foul beast towards the third crystal. I flew the dragon directly towards the final crystal! Only then did Gabriel deliver his famous final blow. We became heroes, and eventually, legends. The greatest the world has ever known."
—Soren's false account about The Order's battle against the Ender Dragon.

"Understand -- when I found that blasted block, we were nobodies. But with its help, we became stronger. Faster. We could do so much more! The others had no idea what I was doing... yet the more I used it, the more we came to depend on it. I knew it was only so long before someone would find out. So I concocted a plan. I would use the Command Block to blink the Ender Dragon out of existence... Securing our status as legends... forever."
—Soren telling the true story behind the quest to defeat the Ender Dragon.

"You know, I've really enjoyed meeting you and all, but..."
—Soren's final words to Jesse's gang before running away.