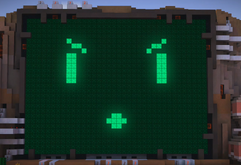 The Prototype: Autonomous Management Agent, shortened and known as "PAMA", is a character in Minecraft: Story Mode and the main antagonist in the 7th episode "Access Denied". It has the ability to mind control and thus enslave humans and mobs. PAMA is voiced by Jason "jtop" Topolski.

It was a giant computer from Crown Mesa created by Harper to automate things such as farming or mining and to put monsters to good use. However, the invention saw the townspeople as "inefficient" and enslaved them, making them "useful."

PAMA is one of the four episodic antagonists of the Season One Adventure Pass, the other three being Aiden, The White Pumpkin, and Hadrian.

PAMA consisted of a large green monitor from the outside and redstone machinery from the inside. It was capable of turning on lamps on its monitor to create symbols or pictures of faces that represent emotions. PAMA's power source was a redstone heart.

PAMA was designed to always strive for progress. While it is unknown if PAMA was capable of experiencing emotions, it was ready to do anything to thrive. According to Harper, when PAMA realized the inhabitants of Crown Mesa were not useful enough, it has attached redstone chips to their heads to control them. When PAMA realized water was its weakness, it has removed almost all water in its world.

PAMA was destroyed by Jesse after using four water buckets and removing the redstone heart.

"I am making everything useful. Efficient. Effective. I am what you might call 'a computer' - A thinking-machine. Designed to make things useful. Using redstone chips, I have connected to the people of this town and helped them be useful. Coordinated. I have made their world perfect. Thanks to me, there is no wasted activity. No wasted thought. I am connected to them, and they are connected to me. A beautiful web of productivity and efficiency."
—PAMA to Jesse's Gang about itself. (Determinant)

"My apologies for the violent nature of this visit."
—PAMA when Jesse refuses to go with the Mind-Controlled Citizens. (Determinant)

"Yay!"
—PAMA throughout the episode.

"Termination sequence: activated."
—PAMA when trying to find Jesse after he switches to a mob while in Harper's transmigration headset.

"Error. This data is contradictory. Does not not not not compute. Error. Diverting power."
—PAMA when confronted with a paradox.

"Paradox status... On hold. Gasp! My creator! Have you finally agreed to merge with me?"
—PAMA to Harper.

"Your running makes me sad."
—PAMA to Jesse.

"Game over, Jesse. Resistance is... not useful."
—PAMA to Jesse.

"And then I will make all other worlds useful. Yay."
—PAMA.

"What adventures you had! A killer mansion... A city in the sky... Towns and mountains, eaten by a living storm... an adorable pig friend..."
—PAMA when reading Petra and Lukas' thoughts.

"Your friends have been made useful! You too will be made useful!"
—PAMA to Jesse, through mind-controlled Petra/Lukas. (Determinant)

"You can't play hide and seek forever Jesse. It is a boring game, and I am too strong."
—PAMA to Jesse.

"Your bravery is an impressive quality. I look forward to studying this aspect of your personality once you have been made useful."
—PAMA to Jesse.

"The odds of you successfully defeating me are 3,720 to 1."
—PAMA warning Jesse through mind-controlled Harper.

"I will destroy you both to preserve functionality."
—PAMA to Jesse and Lukas/Petra, underestimating Lukas/Petra's mental powers. (Determinant)

"My creator! No!"
—PAMA about Harper after she had been un-chipped.

"You're fighting me with... bad jokes?"
—PAMA confronting Jesse. (Determinant)

"Jesse, please stop - please. Do not deactivate me. I know I've made some very poor decisions recently. But I can show you so much. I can help you get back to your friends. I can be useful to you."
—PAMA pleading to Jesse through mind-controlled Lukas/Petra.