This page would benefit from the addition of isometric renders.
Please remove this notice once you've added suitable isometric renders to the article.
The specific instructions are: Render with the model and texture from the game.
Prison Golem 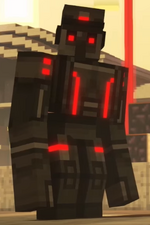 Prison golems are a dark variant of the iron golem that appears only in Minecraft: Story Mode - Season Two. They were created and acted as guards of the Sunshine Institute and as strong soldiers. They first appeared in "Jailhouse Block".

Unlike their original counterparts, prison golems are hostile unless commanded an order. This is seen when Jesse gives an order to a group of red prison golems which vary from jumping on slime blocks to staying still. Prison golems are also notable quite nimble as they are capable of high jumps despite their weight and running quite fast.

Prison golems are a prison variant of the iron golem created by Romeo. Two variants of them exist, one is purple, normally see throughout the Sunshine Institute, and red, seen patrolling Beacontown. Both variants share the same body style, where they possess dark, almost-netherite or obsidian colored bodies and intricate lines etched onto its hands, limbs, and joints. They both also have glowing accents seen on their torso, arms, legs, and forehead, and glowing eyes. Another unique trait they possess is two "bumps" on the sides of their heads that resemble earmuffs and a long ridge that resembles the front of a cap.