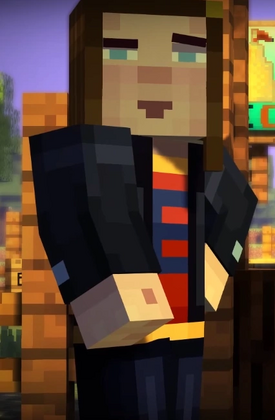 Maya is a character in Minecraft: Story Mode, appearing as a minor antagonist in "The Order of the Stone" and one of the two secondary antagonists in "Order Up!". She is a member of The Ocelots, and later the The Blaze Rods. She is currently under arrest by the Sky City Guards. She is voiced by G.K. Bowes

Maya wears a leather Ocelots jacket in the earlier episodes, but in episode five, there are two crossed blaze rods on it instead. She wears a blue vest with a red shirt labeled with the letter "E", mentioned by Stirpe to be Ellegaard themed merchandise. She has pale skin, light blue eyes and brown hair.

Maya seems to be a young woman who is very selfish and arrogant, like most of the other members of The Blaze Rods. She is extremely loyal to Aiden.