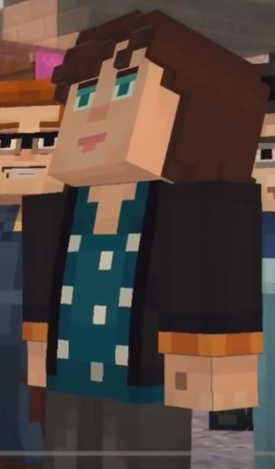 Lydia is a minor character in Minecraft: Story Mode and an announcer at EnderCon.​ She first appeared in ​"The Order of the Stone" ​ and is voiced by Lydia Winters, the Chief Storyteller at Mojang.

Lydia has brown hair, light skin, and turquoise eyes and eye shadow. She wears cyan-blue shirt with a white dotted pattern, a black jacket with orange cuffs, gray pants, and blue shoes with a white stripe.

Her depicted personality matches her personality in real life; which is fun, friendly, and animated.