This page would benefit from the addition of isometric renders.
Please remove this notice once you've added suitable isometric renders to the article.
The specific instructions are: Render of all Lluna variants.
Lluna 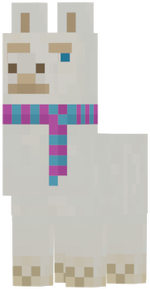 Lluna is a pet mob and Stella's pet llama who first appeared in Minecraft: Story Mode - Season Two in "Hero in Residence" where she and Stella met Jesse's gang and went along with their adventure of stopping Romeo.

Lluna is a teenage llama who possesses many unique traits, somewhat like Reuben. Firstly, she is a white llama who possesses unique blue eyes. She normally wears a scarf with a light blue and purple pattern on her neck. She also has an executive outfit made by Stella, which is a deep purple and black set of a scarf and small hat with a purple accent in the middle.

Lluna is a disobedient, spirited llama, as shown when she tried to escape from Champion City several times due to Stella's abuse, which led her to become fearful whenever she gets threatened by her. Lluna is a smart llama, as shown in "Jailhouse Block" when she tries to find a way to kill hostile mobs (determinant), and she seems to be able to understand speech, as shown in "Hero in Residence" when she frowns at Petra's comments on her as well as Jesse making a joke in Champion City (determinant).

Lluna is notably obsessed with treasure, as she is known as a "treasure-sniffing llama" and led to Jesse finding the Prismarine Gauntlet. She tried to bite Jesse's Prismarine Gauntlet twice in "Giant Consequences," the amulet once, and even Fred's compass once in "Below the Bedrock." She also sniffed out the buried "Golden Apple" armor in "Below the Bedrock" (determinant).