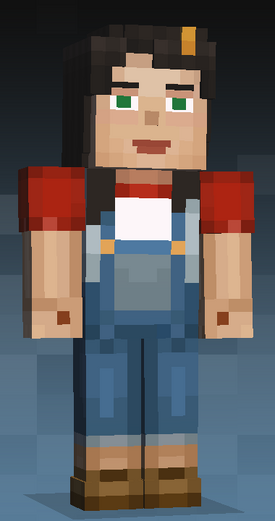 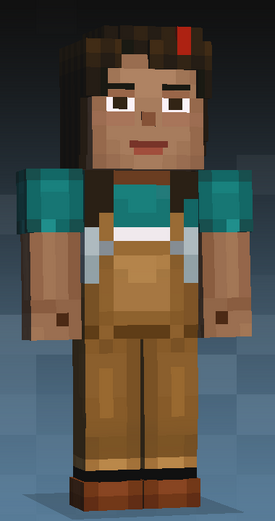 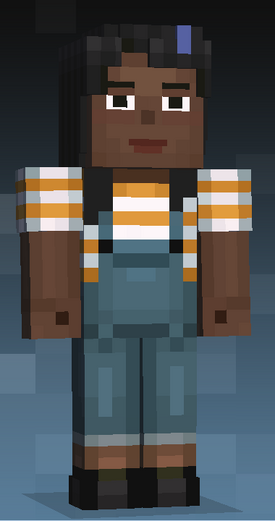 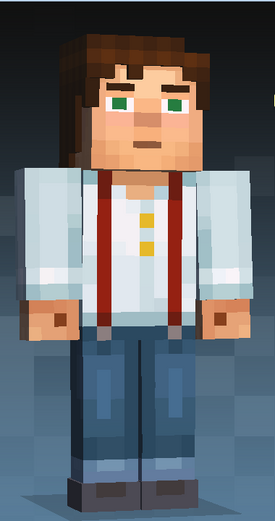 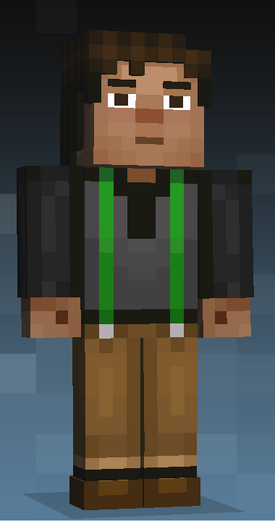 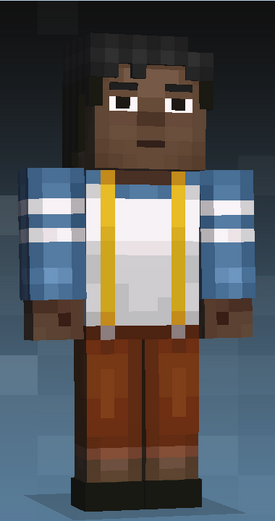 Jesse is the main protagonist and playable character of both seasons of Minecraft: Story Mode, first appearing in The Order of the Stone.

Jesse's gender and appearance is decided by the player. The male versions of the character is voiced by Patton Oswalt, and the female versions by Catherine Anne "Cat" Taber.

There are 6 selectable Jesse choices in Season 1, including three female-presenting versions, and three male-presenting versions. In Season 2, another 6 Jesses are added to the game, totaling to 12 choices. The previous Jesses, from Season 1, have slight changes to their appearance in Season 2, including sleeve length and distinct skin color hues.

Overall, the Jesses have very similar appearances, the female Jesses all have long hair, overalls, and short-sleeve shirts; the male Jesse's have shorter hair, suspenders, and long sleeve shirts.

Jesse can wear several outfits differing from their regular outfits, including the option to choose between different armor types. Near the beginning of "Hero In Residence", Jesse wears an iron chestplate, teasingly called "dork armor" by Petra and later on destroyed by Lluna.

In the end of "The Last Place You Look", you have the option between wearing Magnus's armor and Ellegaard's armor. After this, in "A Block and a Hard Place", you get the choice to keep the armor, or change to a new armor set, offered by Ivor. In "A Journey's End?", you gain Tim armor after respawning, to battle the Old Builders in. Lastly, in "Hero in Residence", you have the option to choose between all of the above armor choices, Petra and Jesse commenting on each armor if you look at them.

In "Below the Bedrock", if you win the trivia competition, you have the option for Jesse to wear Fred's Sleeping Garments, which are similar in appearance to Fred's normal Admin outfit, different shades of blue.

Later on in that episode, you get a choice between several pieces of busted up armor, and if you pay attention to Lluna, you can also find the "Golden Apple" armor.

In "Above and Beyond", Jesse wears a fireworks uniform, consisting of a white tshirt and red overalls with a hat.

Jesse's personality is mostly decided through the players actions, such as generous or selfish, arrogant or humble, polite or rude, etc. but some things they say or do show a general personality no matter what choice is picked. They show genuine worry for their friends, is visibly upset when Reuben dies, horrified when their friends are presumably killed on multiple occasions, and shocked speechless when Aiden pushes Lukas off the edge of Sky City (determinant.) It is also commented by several characters of how tenacious he/she is.

"I'd have to go with the giant chickens. Not because I want to or because I think it would be easy, but because they would be an abomination."
—Jesse to Olivia. (Determinant)

"He's my wingman. People always wanna talk to the guy/girl with the pig."
—Jesse to Olivia. (Determinant)

"But if that's the case... it means we win at being losers."
—Jesse to Olivia. (Determinant)

"Well, have you heard the saying... it's possible to be nice and win?"
—Jesse to Lukas at the Endercon Building Competition. (Determinant)

"I don't wanna die!!!"
—Jesse falling off the bridge if they choose to fight.

"Don't touch my pig!"
—Jesse telling Lukas to stay away from Reuben. (Determinant)

"Reuben? No, not you gu-- pigs! All pigs but Reuben shut up!"
—Jesse while trying to find Reuben. (Determinant)

"I don't know when; I don't know how; but someday, far in the future, when you're least expecting it... we WILL get our revenge."
—Jesse threatening Aiden. (Determinant)

"Well, Ghasts are OFFICIALLY crossed off my to-see list. I'm done with Ghasts, never need to see them... oh crap."
—Jesse in The Nether.

"Can you throw up, like, inside your body?"
—Jesse to Olivia.

"A bow? In a cannon fight? Axel! There are all sorts of clichéd lines about this!"
—Jesse to Axel. (Determinant)

"Ah, what can I say, me and redstone just, you know, speak to each other."
—Jesse to Olivia. (Determinant)

"I never wanted to be a hero... but I'm willing to do the heroic thing."
—Jesse to the group. (Determinant)

"Yeah, good point. Let's just sit here and sing songs instead. First song is called, 'How We Gave Up At the Finish Line.. Because of Lukas.'"
—Jesse being sarcastic to Lukas. (Determinant)

"Well... and they made fun of me when I deserved it. But that's how we are."
—Jesse referring to their friends. (Determinant)

"My hero, Reuben the pig. He may have seemed like just a pig to most people... but he was so much more."
—Jesse referring to Reuben. (Determinant)

"Dude, why are you being such a tool?"
—Jesse to Aiden. (Determinant)

"Can't stop what you can't see."
—Jesse after drinking an Invisibility Potion. (Determinant)

"You better keep away from us, or I'll make you hurt in places you didn't even know existed."
—Jesse to griefers. (Determinant)

"Technology is so awesome!"
—Jesse to Ivor.

"Never tell me the odds!"
—Jesse to PAMA.

"OVER?! I'm just getting started."
—Jesse to PAMA. (Determinant)

"Well, I'm Jesse, and we're the Order of the Stone. Boom!"
—Jesse introducing their Gang to the formerly Mind Controlled Citizens. (Determinant)

"As someone once told me... teamwork makes the dream work."
—Jesse, quoting Soren and CaptainSparklez. (Determinant)

"Wait. Lemme get this straight. This quest what just to track down a stupid llama?!"
—Jesse to Petra, when first seeing Lluna.

"Whoo! That would've been dumb! If it wasn't so AWESOME!"
—Jesse after shoving several Charged Creepers over the edge with the Prismarine Gauntlet.

"I have lots of names too. The people of Sky City call me the Ground-Finder. Other people know me as the Wither Slayer. YOU can call me... Jesse."
—Jesse in response to Jack. (Determinant)

"I know it's pretty intense, but you don't have to be scared, Jack."
—Jesse to Jack in the Sea Temple. (Determinant)

Romeo: "DO YOU REALLY THINK YOU CAN DEFEAT ME, JESSE?"
Jesse: "I don't think; I know!"
—Jesse fighting Romeo.

"Sometimes you just gotta fake it Radar. Hero time."
—Jesse to Radar, encouraging him to jump across. (Determinant)

"No freaking way, Warden. Go eat a slimeball."
—Jesse if they refuse to work for the Warden. (Determinant)

"Go to the Nether and... jump in a... lava lake, Warden."
—Jesse if they refuse to shear Geoff the Mooshroom. (Determinant)

"So, Jesse, how was your day? Oh, it was great. Met a red, glow-y... all-powerful crazy person who trapped me in a near-indestructible cage."
—Jesse talking to themself. (Determinant)

"I can't just leave them here."
—Jesse to Xara, when Xara tells to leave either Lluna or Nurm behind.

"Here, I found this, and... there are good things left, if you look for them."
—Jesse giving Xara her bed. (Determinant)

"I'll be right there with you, Petra. If you think your place is out there, then so is mine."
—Jesse to Petra in the cabin. (Determinant)

"You have to do what's best for you, Petra, and no matter how far that takes you... you'll always know where to find me."
—Jesse to Petra in the cabin. (Determinant)

"Let's go stop Romeo. His days of being 'Jesse' are over."
—Jesse and Petra leaving the cabin.

"Go for it Radar. I"ll see you topside."
—Jesse to Radar (determinant)

"Administrate this!"
—Jesse to Romeo, before defeating him.