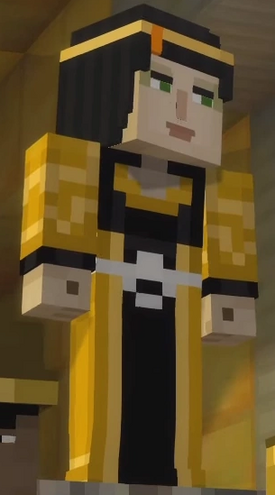 Isa, also known as The Founder, is a character in Minecraft: Story Mode. She is the founder and leader of Sky City. She is voiced by Melissa Hutchinson and first appeared in "Order Up!".

Isa is a woman with long black hair, light skin, green eyes (dark green in the Netflix version), green eye shadow, and a long nose. She wears long black and golden colored robes, a white belt, and a golden crown or headband.

Isa is portrayed to be dominant and controlling. She is usually kind, but can be gullible and stubborn which causes Jesse's Gang trouble when Aiden tells her that they're troublemakers.

"People of Sky City, a crime has been committed."
—Isa to the citizens of Sky City.

"And when something falls... it is gone forever."
—Isa to Jesse. (Determinant)

"Cute."
—Isa to Jesse after being called a control freak. (Determinant)

"I can't decide whether I want our death to be painless for my sake, or excruciating for yours!"
—Isa to Jesse.

"This has been down here the whole time..."
—Isa discovering ground below Sky City.

"I believe so, and when I get up there I'm gonna tear those Blaze Rods limb from limb."
—Isa to Jesse, about to head back up to Sky City.