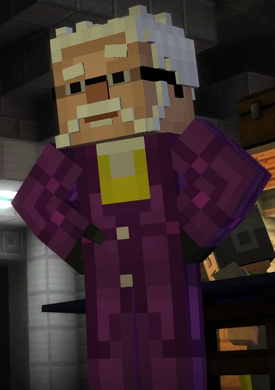 Hadrian is a character in Minecraft: Story Mode, and the main antagonist in "A Journey's End?". He is the tyrannical leader of The Old Builders, and was formerly in charge of The Games played by the Competitors. He is voiced by Jim Cummings.

Hadrian is portrayed to be ruthless, bossy, and a cheater. He often resorts to unethical means to fulfill his desires and get what he needs, and will also go back on his word and refuse to fulfill his deals and promises.

Hadrian is also power-hungry, sadistic, selfish, rude, immoral, and overall evil in nature. He has a tendency to make deals with others, and break those deals with no second thought, showing his honor-less nature. For instance, at first, he tells Jesse and Petra/Ivor that if they win the Games, they get to keep The Old Builder's Portal Atlas, which Jesse and friends need to get back to their home world. He later changes the deal and tells Jesse that if he/she wins the games, his/her friends will have to stay behind and work in his quartz mines, and if he/she loses, Hadrian will let his/her friends go if Jesse stays behind in their place. It is highly unlikely that Hadrian intended to keep his end of the bargain. As implied by Emily and Harper, regardless of whether Jesse wins or loses, Hadrian will very likely send Jesse ​and his/her friends all to the mines anyway, while claiming that was the original deal. As shown in his treatment of competitors who lose in the games, and his aforementioned deals, Hadrian likes to maximize productivity and had no qualms about enslaving people by sending them to work in his quartz mines in The Nether. He even admits that he's fine with trapping people forever in public.

Hadrian is also hypocritical, as shown if Jesse agrees to Hadrian's second deal, when he/she inevitably breaks it later, Hadrian gets enraged and yells at Jesse for breaking their deal. He says they had an "agreement" and Jesse "promised" him, despite his own aforementioned habit of breaking deals. As well as that, when first meeting Jesse, he accuses him/her of being a "sore loser" for lashing out because his/her friends were eliminated, or seemingly killed, despite Jesse not knowing that his/her friends would respawn. Later, when Jesse and the other competitors step on the winner's platform, Hadrian is enraged, due to not wanting anyone to win the games, being a sore loser himself. As well as that, he may even tell Jesse off for being rude, despite being equally, if not even more rude, than he/she is.

"You... DARE to soil my - our - games like this and then stand here, STARING; SILENT!!?"
—Hadrian to Jesse, if Jesse chooses to stay quiet. (Determinant)

"Your wish is my command, buckaroo."
—Hadrian to Jesse in The Games. (Determinant)

"It's called 'respawning,' champ. We're not monsters."
—Hadrian to Jesse.

"Oh. Yee-ikes, is that who you got that from? I don't know what she told you... but those things aren't exactly valuable."
—Hadrian, about Cassie Rose and the White Pumpkin mask. (Determinant)

"Surrender the Redstone Heart, now. Because, ha, I will trap you here forever. I am 100% fine with that course of action!"
—Hadrian to Jesse, announcing his intentions while showing his complete lack of empathy.

"No-one wins these games unless we let them. Not even Tim."
—Hadrian implying Tim is not real.

"I knew you were a smart one, bucko. Of course he's not real."
—Hadrian confirming Tim is not real. (Determinant)

Hadrian: "Choices are funny, aren't they, Mevia?"
Mevia: "What do you mean, Hadrian?"
Hadrian: "I mean some choices take you places... others get you nothing but dirt and gravel in your section!"
Mevia: "Ha, it's true. It's true!"
—Hadrian and Mevia making fun of Jesse during The Walls.

"So help me, NONE of you will leave this place until you ELIMINATE EACH OTHER."
—Hadrian to everybody in the Walls game. (Determinant)

"Well, that's cute. Almost as cute as you'll look down in the mines, slugger."
—Hadrian to Jesse. (Determinant)

"Straight and to the point. I'd like it...if I weren't simmering with barely controlled rage right now!"
—Hadrian to Jesse. (Determinant)

"Mevia! Come on! What kind of a rookie move was that!?"
—Hadrian to Mevia.

"I'll admit, you're a quick sport. But not quick enough for my axe!"
—Hadrian to Jesse during combat.

"Shut up! Just shut up! All of you, shut up!"
—Hadrian to Jesse's Gang, Harper and Emily.

Mevia: "That's right Hadrian, and it looks like we're just gonna have to wing it."
Hadrian: "You're fired, Mevia. You're fired."
—Hadrian and Mevia in the Giant Chicken Dimension. (Determinant)