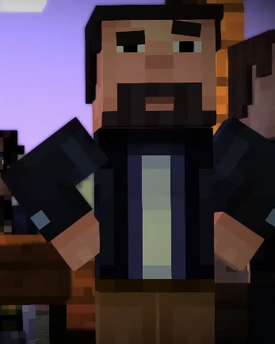 Gill is a character in Minecraft: Story Mode, appearing as a minor antagonist in "The Order of the Stone" and one of the two secondary antagonists in "Order Up!". He was a member of The Ocelots, a team of builders rival to Jesse's Gang, and later became a member of The Blaze Rods. He is voiced by Phil LaMarr. He first appeared in "The Order of the Stone".

Gill has a light skin tone, with a beard and a mustache and he initially wears The Ocelots jacket. In episode five, his jacket is changed to the one belonging to The Blaze Rods.

There is little seen of his personality, other then being rude alongside with Maya and Aiden. He seems to view other people that are not in his circle with disgust. He can also be a little overexcited at times.

"Ha-ha-ha! Look, it's the order of the losers, again."
—Gill making fun of Jesse's Gang.