This page would benefit from the addition of isometric renders.
Please remove this notice once you've added suitable isometric renders to the article.
The specific instructions are: In-game render.
Giant Ghast 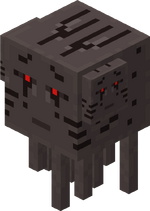 The Giant Ghast or the Wither Ghast is an antagonist and boss mob that appears in "Jailhouse Block". It is an exclusive variant of the ghast, created by Romeo.

Unlike the Ghast, the Giant Ghast is able to fire multiple volleys of exploding fireballs similar to a Blaze, fire curveball fireballs, and groups of fireballs. It is also able to call Ghasts to aid it.

The Giant Ghast is, as the name implies, a giant version of a ghast. It has three faces: the main one at the front and smaller, secondary ones on its right and left side akin to the Wither. It is dark gray in color, in contrast to the white of a typical Ghast, and has a vulnerable red spot on top of its head.

When Jesse knocked back a fireball at the Giant Ghast, it began spitting several fireballs around itself frantically, accidentally hurting the Ghasts around it. This was taken as an attack by the Ghasts causing them to fire back. Jesse then jumped on the Ghasts' heads to reach the Giant Ghast and stab it in its weak point. When the Giant Ghast died, the other Ghasts did as well.