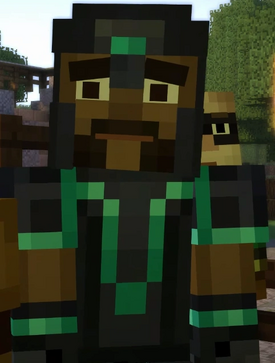 Gabriel the Warrior is the hero, who's a member of the Order of the Stone, and a tritagonist in Minecraft: Story Mode. He was considered by many to be the greatest warrior of all time. He is voiced by Dave Fennoy. He first appeared in ​"The Order of the Stone".

Gabriel has dark skin with a darker moustache and beard. He also wears navy tinted armor with diamonds embedded in it. His skin turns gray and eyes turn pink / blue if he gets withermad / withersick.

Gabriel is very strong, brave, and friendly. He is the warrior who, according to legend, dealt the said "killing blow" to the Ender Dragon, according to Soren. He always wanted to help people, and even after the truth about the Order of the Stone was revealed, Gabriel felt guilty and wanted to make things right. However, if he's ends up with wither sickness, he wants to stay safe in the cave. This can be seen as cowardice or self-care.

Gabriel, however, was flawed in his thinking that friendships slows one down and are only bindings. Jesse disagrees and proves this to be wrong through his/her actions (determinant).

Gabriel is shown to be very grandiose and egotistical, proclaiming himself "The Mighty Gabriel" and describing himself as "terribly handsome".

The list below shows the victims Gabriel has killed:

"What question do you have for the mighty Gabriel?"
—Gabriel to Jesse. (Determinant)

"I think the scientific name for it is 'poop'! That's what I slipped on."
—Gabriel to Olivia. (Determinant)

"Everyone is running away, except for you."
—Gabriel to Jesse's gang after The Wither Storm spawned.

"Who's Gabriel?"
—Gabriel to Jesse. (Determinant)

"Hello, my name is Gabriel."
—Gabriel to Ivor. (Determinant)

"Hold on to your potatoes!"
—Gabriel. (Determinant)

"Say what you like about Witches, they sure know how to make a cake!"
—Gabriel. (Determinant)

"Ah, never say the word poke to a swordsman, even in a jest "
—Gabriel to Jesse. (Determinant)

"I see that time has made you bitter....."
—Gabriel to Ivor at the Endercon keynote.

"People used to look at me like that once, Jesse. Having my memory restored has been both a blessing and a curse. Perhaps they deserve to know the truth about The Order. All those lies we told them, maybe I should finally come clean."
—Gabriel to Jesse (determinant).