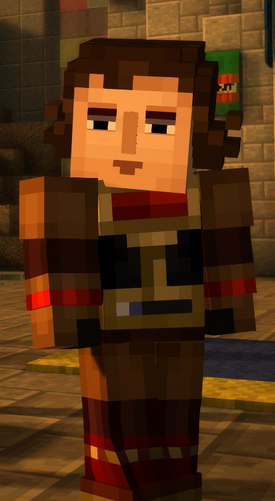 Ellegaard the Redstone Engineer, more commonly referred to as Ellegaard or Ellie, is a Redstonian, a member of The Order of the Stone and a major character in the first season of Minecraft: Story Mode. She is voiced by Erin Grey Van Oosbree "Grey DeLisle-Grey Griffin".

She wears armor that has a brown tinge to it and a bright red around the collar. In episode 1, she can be seen with Steampunk goggles and a helmet. However, in episode 2, she doesn't have her headgear and instead has brown hair that curls on the sides of her head. She has red lines around the edge of her sleeve and a golden shape around her torso. She also has light brown shoes and red leggings. When she is not wearing armour, she wears a white shirt under a copper-coloured blazer with dark reddish-brown pants and black shoes.

Ellegaard can be cold and judgmental, but genuinely cares for her close friends. Even Magnus, who she doesn't like for his reckless and not-at-all smart and calculated behavior. Through the extensive grats of her arrogance and circle-chain, she can automatically belittle people into doubting themselves, Olivia being a prime example of her mild manipulation; intentionally or not seesaw. Though she often has arguments and prejudice perspectives with her rival, Magnus, like all her antagonists, her conflict priorities swap to and fro on her list of precedence when the situation turns urgent. Notwithstanding all her un-self-aware flaws, her personality doesn't only consist of negatives: Her smarts and cleverness with redstone mechanics are clearly what steered her in the Order of the Stone as an engineer which she knows well. She keeps a habit of openly notifying when she respects somebody amidst her guarded formality. Despite the path of experience, once she gets a negative impression of someone, it can be hard to change her mind with her stubbornness unless a great deal has been done. (E.g: Magnus' death and Jesse momentarily taking down the Witherstorm in episode three) Her honesty, though commonly over-truthful, can be openly noticed in the reflexive pieces of her temper.

The list below shows the victims Ellegaard has killed:

If Jesse chooses to take Ellegaard's armor when she and Magnus offer theirs, she gets killed when the Wither Storm hits her into a tree, due to her not having armor to protect herself.

"Wait...waitwaitwait, how do you know what a Command Block is? Not to seem belittling, but we're talking mega-levelled, ultra-genius stuff here."
—Ellegaard to Jesse.

"Oh, so you're sticking up for Magnus. That's very, sweet."
—Ellegaard to Axel.

"You really weren't kidding."
—Ellegaard to Jesse's Gang and Magnus if Jesse chooses to find Magnus with Axel.

"...and I, Ellegaard, will make a Command Block, today!"
—Ellegaard to Jesse and Olivia.