This page would benefit from the addition of isometric renders.
Please remove this notice once you've added suitable isometric renders to the article.
The specific instructions are: Render with the model and texture from the game 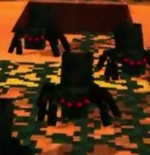 Like normal cave spiders, they jump at the player and can scale horizontal blocks. Unlike their base game counterparts however is their poison as it can kill the player almost instantly, as opposed to being weakened by it.