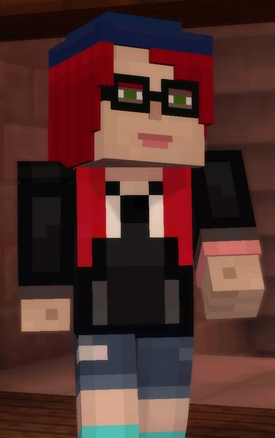 Cassie Rose​ is a character in Minecraft: Story Mode and the hidden main antagonist in "​A Portal to Mystery". She has a pet cat named Winslow. She is voiced by Ashly Burch. She also has a persona, the serial murderer known only as the White Pumpkin killer.

Cassie Rose appears to wear a black shirt and blue shorts. She has red hair, green eyes, and wears a blue cap along with black glasses.

Cassie Rose is portrayed to be a grumpy, suspicious individual who seems to be very frightened as well. She also cares very deeply for her cat Winslow.

She also appears to be a somewhat friendly, yet fearful, individual who is good friends with the YouTubers. Her aggressive nature is also hinted at, as shown when she suggests throwing Lukas outside to be eaten by zombies, much to the YouTubers' shock.

Her persona, the White Pumpkin killer, is shown to lean more into Cassie Rose’s aggressive tendencies by being willing to kill her victims to claim an enchanted flint and steel. When the White Pumpkin is revealed to be Cassie Rose, she states that she was trapped in the YouTuber’s world for a very long time. Her time in their world likely caused her to be in her current mental state.