This page would benefit from the addition of isometric renders.
Please remove this notice once you've added suitable isometric renders to the article.
The specific instructions are: Render with the model and texture from the game
Benedict the Eversource 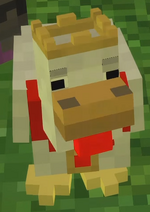 Benedict the Eversource is a chicken that has the ability to lay Spawn Eggs of almost any kind of Mob. She once belonged to The Old Builders, but is shown as now belonging to Isa.

The Eversource acts as a normal chicken would with the exception of laying Spawn Eggs. She is mainly seen wandering and pecking the ground.