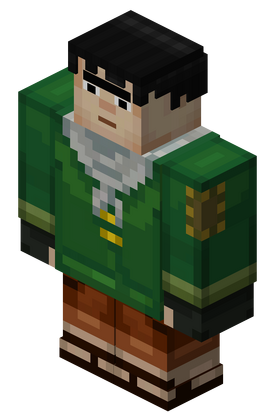 Axel is one of the main characters in Minecraft: Story Mode. He is a large, strong human who is known to be a prankster/joker, is one of Jesse's best friends, and a member of Jesse's Gang. He is voiced by Brian Posehn. He first appeared in " The Order of the Stone".

Axel is muscular and tall in appearance and has short, black hair along with a unibrow and his skin is pale white. He has a 2.5 block build. He wears a green jacket, black finger-less gloves, tan pants, and sandals. Later on, he also gains a helmet similar to Magnus the Rogue's, a chest piece similar to his former shirt with gloves and brown boots.

Axel's jacket is now replaced with a green plaid flannel, which is left unbuttoned to reveal a black t-shirt with a skull on it.

Axel is portrayed to be a joker who enjoys making people laugh. Throughout the game, he acts as a source of comic relief. He makes lots of sarcastic quips and short one-liners. He is revealed to be a bit of a coward, but is very fierce when defending his friends and will risk a great deal to protect them. He is, at times, loud and explosive and enjoys griefing. Axel is also shown to be a kleptomaniac, as he tries to steal small items whenever he can.

"Thanks for believing in me, buddy."
—Axel to Jesse in the Temple of the Old Builders

"The spirit is willing, but the flesh is sad."
—Axel to Jesse. (Determinant)

"After I watch one more chicken get owned."
—Axel to Jesse. (Determinant)

"Haven't you done enough damage for one day? Petra might be dead because of you!"
—Axel blaming Lukas for Petra's presumed death.

"Jesse means US, not you."
—Axel to Lukas (Determinant)

"I felt all of that!"
—Axel after he tripped after the potion of slowness wore off. (Determinant)

"Isn't it weird how dispensers are carved to look like spooky little faces? What do you dispense, little guy?"
—Axel

"Dude, what a chicken!"
—Axel talking about Soren when he runs away. (Determinant)

"How do you make Enderman focused? I can't even make myself focused."
—Axel to Olivia.

"Whoa, that is, without question, the coolest thing I have ever, ever seen!"
—Axel when Jesse shows him the weapon he/she made.

"I think I got something... in both my eyes."
—Axel, when Jesse is talking about Reuben in his speech. (Determinant)

"WHY ARE WE SCREAMING?!"
—Axel. (Determinant)

"Oh, it's that guy from EnderCon who was afraid of chickens!"
—Axel about the usher. (Determinant)

"I thought maybe you'd have like a cool motivational thing to say there, but... that's cool, that's cool."
—Axel to Jesse outside the Temple of the Old Builders. (Determinant)

"It's just... I really love cake."
—Axel to Jesse inside the Temple of the Old Builders.

"That guy's voice is the worst. I can even hear it through the obsidian."
—Axel to Jesse about Hadrian's voice when Axel's in an obsidian prison.

"Huh? What part are we at? Am I being awesome?"
—Axel after waking up.

"I promised myself I wouldn't cry. Promise broken!"
—Axel when he gives Petra one last hug before her departure.