Minecraft Marketplace (Minecraft Store on PlayStation 4) is an interactive in-game store for community-made content and a partner program between Microsoft and content creators.[1] It is exclusive to Bedrock Edition.

Players can purchase access to skins, textures, and worlds from community creators, who in turn get reimbursed for their creations. Players can spend real-world currency to add "Minecoins" (or Tokens on PlayStation 4) to their virtual wallet and access these Marketplace creations.

The Marketplace was announced on April 10, 2017,[2] being added to Pocket Edition 1.1.0. When the Better Together Update was released, parts of the Xbox One Marketplace were added as the Xbox One Edition was made part of the Bedrock Edition.

The main screen of the Marketplace.

The "Birdies" skin pack by 57Digital in the Minecraft Marketplace.

The text that shows when a transaction is in progress.
Add a photo to this gallery 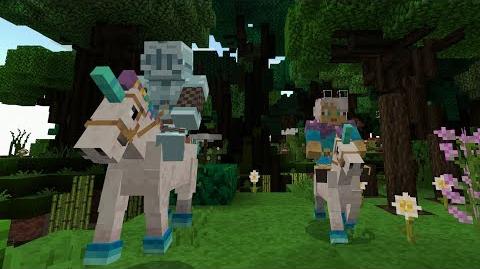 Discover Minecraft Marketplace and Minecoins
Add a photo to this gallery

Retrieved from "https://minecraft.fandom.com/wiki/Minecraft_Marketplace?oldid=209912"
Community content is available under CC-BY-SA unless otherwise noted.