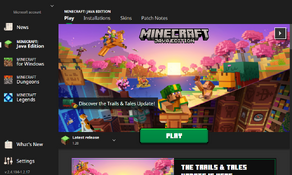 On the left side, a "News" tab, a tab for each game, and the Minecraft Launcher "Settings" tab can be seen.

The top left corner of the Minecraft Launcher contains the user's Xbox gamertag for the currently active account (which might differ from their Minecraft: Java Edition username)[2]. By clicking on it, users can manage or log out of their active account, and see a "Help" page with various links to helpful resources.

The main "Play" section allows the user to download (if needed) and launch Minecraft: Java Edition with the "Play" button, and also includes an installation selection on the left (which sorts installations by last played), the user's Java Edition username on the right, and a list of the latest news for the game from minecraft.net below.

There is also a "Patch notes" section where the patch notes of the game's update can be seen, including the snapshots (if enabled).

On the create/edit installation page, the following can be changed:

Before, it was possible for the users to manually set a logging configuration (see Debugging on wiki.vg for more info), however this doesn't seem to work anymore.[3]

A specific game version's server jar can also be downloaded by selecting the version in the list and pressing the "Server" button next to it.

The Minecraft Launcher has the ability to play most older releases of the game (and older snapshots, if enabled) by default, but also some older versions prior to Release 1.0. In order to see these versions in the installations section, the player must enable "Show historical versions of Java Edition" in the Minecraft Launcher settings tab. Because these versions are outdated and unsupported, they may contain bugs and errors that are not present in newer versions. It is recommended to run old versions of the game in a separate directory and backup worlds to avoid save corruption or other problems.[4]

Once historical versions are enabled, the following can be accessed:

Some issues with these older versions include:

In the "Skins" section, the user can view and change their in-game skin. By default, the skin is either Steve or Alex.

In the skins library, skin can be applied by clicking "Use". The skin can also be edited, duplicate, or delete by clicking the ellipsis button. By default, the library contains the default Steve and Alex skins, which can be duplicated or applied, but not removed.

Visiting this section without purchasing the game displays a button that redirects to the Minecraft: Java Edition store page.

The main "Play" section allows the user to download (if needed) and launch Minecraft for Windows (Bedrock Edition) with the "Play" button, and also includes the user's Xbox Gamertag on the right, and a list of the latest news for the game from minecraft.net below.

There is an "FAQ" section with frequently asked questions and answers about the Minecraft Launcher and Minecraft for Windows (Bedrock Edition), an "Installation" section to repair or uninstall the game, and a "Patch notes" section where the patch notes of the game's updates can be seen (not including beta versions).

This section is a work in progress.
Please help in the expansion or creation of this article by expanding or improving it. The talk page may contain suggestions.

The main "Play" section allows the user to download (if needed) and launch the latest version of Minecraft Dungeons with the "Play" button, and also includes images from the game and a list of the latest news articles from minecraft.net below. This section also contains a notice that the game can be purchased separately from the Microsoft Store for Windows. If the player is not playing on the supported platform, a small message on the bottom is shown that displays: Where is the play button?! Minecraft Dungeons isn't available on (platform).

There is a search bar and a filter option to narrow down the results when searching the DLCs. The bundle or/and the DLCs can be shown by checking the box.

Each DLC is shown in a card-like structure with the DLC info on the left and a cover image on the right. There is also a slideshow on the bottom of the card.

The FAQ section is shown when pressing the FAQ tab. There is a list of troubleshooting sections and a link to the Minecraft Dungeons FAQ on the Minecraft Help Center.

This section is missing information about the Minecraft Launcher appearance when the game was purchased.
Please expand the section to include this information. Further details may exist on the talk page.

Visiting this section without the game purchased displays a button that redirects to the Minecraft Dungeons buy page. If bought, it shows an uninstall button and a repair button.

In the main "General" section, users can:

In the "Accounts" section, users can add, switch, manage, or remove their Microsoft accounts.

The "About" section contains details about the Minecraft Launcher including its version, credits, and third-party licenses, as well as a list of patch notes by clicking the "What's New?" button.

Important Note
On Windows, this will only work on the old Unified Minecraft Launcher and NOT the Microsoft Store version.
This section is missing information about the default host of the proxy (if available) and the --nativeLauncherVersion flag.
Please expand the section to include this information. Further details may exist on the talk page.

As of version 2.2.25xx, the Minecraft Launcher has these command-line options available for Minecraft: Java Edition:

This applies only to players using Windows 10 or newer. Older versions of Windows are not able to use the new Minecraft Launcher for Windows. With the addition of a new launcher, you can uninstall the old launcher to remove any confusion between the two. For clarity, the new launcher is referred to as the "Minecraft Launcher for Windows" and the old launcher as the "Minecraft Unified Launcher".

How to uninstall the Minecraft Unified Launcher (old launcher):

Now only one launcher should be installed. Run the Minecraft Launcher for Windows to ensure it still works; if it doesn't, reinstall using the Microsoft Store.

Launcher or game mods may need to be migrated or re-installed to the new Minecraft Launcher for Windows installation location before uninstalling the old launcher. Check with the mod developer for more detail.