Minecraft Earth was discontinued due to outdoor restrictions as a result of the COVID-19 pandemic.
It can no longer be downloaded or played, but the contents of this page are kept for historical interest.
Wooly Cow 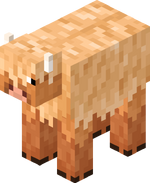 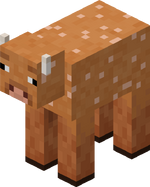 The wooly cow was a wooly variant of the cow found only in Minecraft Earth, being based off of Highland Cattle.

Wooly cows were wooly variants of normal cows. They possessed a thick brown coat which drooped from its body and face, covering its other eye. They had slightly brown skin, seperated brown hooves, white horns, and a pink muzzle. Their overall appearance made them resemble Highland Cattle, which have similar traits.

Similar to normal cows, wooly cows wandered around, mooing and breathing occasionally. They avoided water, lava and walking off cliffs high enough to cause fall damage. They fled for a few seconds when harmed.

Wooly cows were an uncommon mob drop and had a 4.1% chance to be obtained from cow tappables.