Minecraft Earth was discontinued due to outdoor restrictions as a result of the COVID-19 pandemic.
It can no longer be downloaded or played, but the contents of this page are kept for historical interest.
Viler Witch 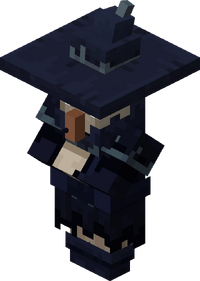 The viler witch was a more devious-looking variant of the witch found only in Minecraft Earth.

Viler witches were a more devious-looking variant of the witch. They were also noticeably bigger than the normal witch. They were often seen wearing a wide dark-grayish witch hat, larger than those of normal witches, and they had a dark blue-black tattered robe with grey stripes on the end of their shoulder sleeves, black around the end of the sleeves, a stylized grey pattern on the front, and the ends of the robe were ripped. It was also noticeable that the robe's collar covered their neck upwards. They also wore dark-purple boots. Unlike normal witches, their wart was not flesh-toned, rather it was deep dark purple in color.

Viler witches acted similarly to normal witches, but they were also able to use lingering potions of harming and poison in combat. They usually drank an invisibility potion before attacking, and drank a potion of healing if hurt. They were also immune to poison and damage from harming potions. Their hat was also observed to float above its head every time it used a lingering potion, differing it from normal witches.