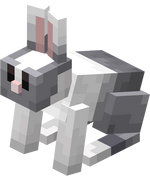 A Vested Rabbit is a variant of the rabbit with gray fur patches found only in Minecraft Earth.

Vested rabbits are a variant of the rabbit with white fur with a gray patch of fur covering the face and up until the base of the ears. They also resemble the "Toast" rabbit skin. Their lower-half body is light gray running down to their feet, which ends with a dark-gray patch. They have dark eyes.

Vested rabbits are of an uncommon rarity and can be found in grass and pond tappables, with it being rather hard to obtain in grass tappables with a 2.0% chance of getting one. It is also one of the prizes in the Season 4 prize map.

Similar to ordinary rabbits, vested rabbits have the same AI behavior, wandering aimlessly, avoiding lava and cliffs that are enough to cause fall damage.

Just like any other rabbit variant, vested rabbits drop the same items when killed: