Minecraft Earth was discontinued due to outdoor restrictions as a result of the COVID-19 pandemic.
It can no longer be downloaded or played, but the contents of this page are kept for historical interest.
Umbra Cow 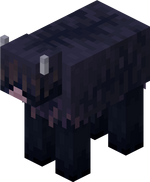 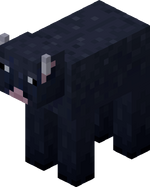 The umbra cow was a dark hairy variant of the wooly cow found only in Minecraft Earth.

Umbra cows were a dark purple variant of the wooly cow. Their overall appearance resembled that of the wooly cow but the main difference is that its fur was covered in a dark purple hue. Unlike the wooly cow, its face was completely covered by its hair and remnants of brown fur were seen near the ends of its purple fur. Its nose, muzzle, and horns had a purplish hue to them.

Similar to normal cows, umbra cows wandered around, mooing and breathing occasionally. They avoided water, lava, and walking off cliffs high enough to cause fall damage. They fled for a few seconds when harmed.