This page describes content that exists only in outdated versions of Minecraft Earth.
This feature used to be in the game but has since been removed.
Sunset Cow 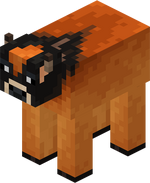 The sunset cow was a variant of the cow covered in black and golden brown fur exclusively found in Minecraft Earth.

Sunset cows were a rather brightly-colored variant of the cow with their whole body covered in a golden-brown coat of fur, with the exception of their face, nape, and back where they have black fur instead. Their head was rather dark in color with a long patch of golden-brown fur on their forehead. They had slightly dark-brown tips on their ears, a white muzzle running around their nose, and dark hooves.

Sunset cows were of an uncommon rarity and were obtainable through cow tappables with a 2.5% chance of obtaining. They were also obtainable as a prize in Season 5.

Similar to normal cows, sunset cows wandered around, mooing and breathing occasionally. They avoided water, lava and walking off cliffs high enough to cause fall damage. They fled for a few seconds when harmed.

When killed, the sunset cow dropped: