Minecraft Earth was discontinued due to outdoor restrictions as a result of the COVID-19 pandemic.
It can no longer be downloaded or played, but the contents of this page are kept for historical interest.
Mud 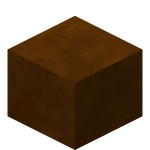 Mud was a fluid block in Minecraft Earth that slowed down entities.

Mud was able to picked up or deposited via a bucket. When picked up, the player obtained a bucket of mud. A bucket of mud was obtainable rarely from certain tappables, as well as from crafting using a bucket of water and 8 dirt blocks.

Using a bucket of mud on a solid block deposited a source block of mud that flowed outward by one block on all sides. water was able to flow over mud, destroying the source block if it reached it.

Muddy pigs were often seen playing or rolling in mud.

If flowing lava came into contact with flowing mud, it created dirt.

Mud was used to make a muddy pig muddy again after mud has washed off from the pig getting wet, as well as a means to slow down mobs. Mud, like other fluids, wasn't able to be destroyed by explosions. It flowed slowly, in a very similar manner to lava.