Minecraft Earth was discontinued due to outdoor restrictions as a result of the COVID-19 pandemic.
It can no longer be downloaded or played, but the contents of this page are kept for historical interest.
Moobloom 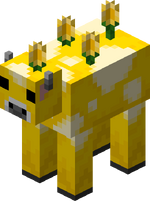 The moobloom was a buttercup-covered variant of the mooshroom found only in Minecraft Earth. It was a rare drop of cow tappables. Mooblooms were like mooshrooms except yellow and sprouted buttercups instead of mushrooms.

The moobloom was a buttercup-covered variant of the normal cow. Its body was yellow with big white spots scattered throughout its body and head. It had two big black eyes, just like a mooshroom. It had 4 buttercups growing out of it, with three on its back, and one on its head. It had a white muzzle, a dark grey snout, and gray horns.

Mooblooms left a trail of yellow flowers as they walked, with each flower they plant having an 80% chance of being a dandelion, or a 20% chance of being a sunflower.[verify] Otherwise, mooblooms mostly had the same AI behavior as mooshrooms and cows. They wandered aimlessly, mooing and huffing constantly, avoiding lava and cliffs high enough to cause fall damage.

Mooblooms were a rare mob drop obtainable from cow tappables with a very low 0.6% chance of getting it, making it the rarest cow variant to obtain in Minecraft Earth. It was also obtainable by purchasing the "Roadside Inn" buildplate.

A Moobloom was able to be sheared for 1 Buttercup.

Just like a normal cow, the moobloom dropped the following when killed: