This page describes content that exists only in outdated versions of Minecraft Earth.
This feature used to be in the game but has since been removed.
Jumbo Rabbit 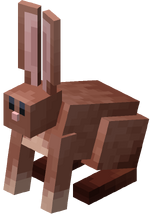 The Jumbo Rabbit was a large and dark brown variant of the normal, smaller rabbit. As its name implied, it was larger than the average rabbit, with it almost being the size of the Mob of Me. Its ears are longer and different in shape. Its whole body is darkish brown in color, with a light-brown underbelly, with light-brown front paws. Its hind legs were relatively larger than its front legs, and its feet and legs end in very dark brown fur.

The Jumbo Rabbit was of uncommon rarity, and were obtainable as a reward in rare adventures. Jumbo rabbits were also found in grass and pond tappables, with it being harder to obtain in grass tappables with a 1.7% chance of obtaining it. It was also obtainable by purchasing "The Warren" buildplate.

Jumbo rabbits had the same AI behavior as normal rabbits. They wandered aimlessly, avoiding lava and cliffs high enough to cause fall damage. Attacking a rabbit without killing it caused it to flee.

When killed, the Jumbo Rabbit dropped: