This page describes content that exists only in outdated versions of Minecraft Earth.
This feature used to be in the game but has since been removed.
Jolly Llama 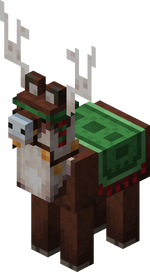 The jolly llama was a passive mob that served as a Christmas-themed variant of the llama found only in Minecraft Earth.

Jolly llamas were a festive variant of the llama. Unlike the normal llama, they possessed a unique coat color pattern being all brown and having a large white patch on its neck and chin. Their nose was a snowy white and they also possessed small gray spots on the tips of its ears. On its head was a green headdress with two antlers, on its neck was a collar filled with small gold bells, and on its back was a green carpet with a unique pattern and red accents on its edges. It lastly possessed grey hooves.

The jolly llama was obtainable by scanning specific QR codes in various parks around the world or by completing a seasonal challenge when available. It was also obtainable by purchasing the "Ranger's Nest" and "Jolly's Lodge" buildplate. Tapables during the holidays or the last challenge season also had a small chance of containing a jolly llama.

Jolly llamas looked for ferns and large ferns and ate them. After eating them, they started prancing around and made a jingling noise when they hopped.