This page describes content that exists only in outdated versions of Minecraft Earth.
This feature used to be in the game but has since been removed.
Horned Sheep 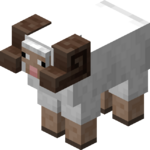 The horned sheep was a goat-like neutral mob and horned variant of the sheep exclusively found in Minecraft Earth.

Horned sheep were rare mobs that were only obtainable via sheep tappables, with a very low 0.9% chance of getting one. It was also obtainable by purchasing the Highland House buildplate, as well as being a reward in the Season 7 prize map, where the objective was to craft one of each type of hoe.

Similar to sheep, they had the same AI behavior. They wandered aimlessly, avoiding lava and cliffs high enough to cause fall damage.

When provoked, the horned sheep pawed and stomped the ground, and charged and rammed the enemy with its horns. These attacks dealt 3

When killed, an adult horned dropped:

When sheared, horned sheep dropped 1–3 wool. A sheared horned sheep regrew its wool after eating from a grass block. A horned sheep didn't drop a horn if killed before its wool regrew after being shorn.