This page describes content that exists only in outdated versions of Minecraft Earth.
This feature used to be in the game but has since been removed.
Furnace Golem 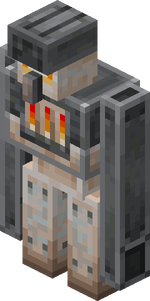 A furnace golem was a variant of an iron golem with a blast furnace as its body.

Furnace golems were dark gray and beige in color with gray outlines. They also had a grill with three openings where coal was lit as if a normal blast furnace. Its head had a dark gray forehead with two grooves, bright orange and red eyes, and its face became bright orange and red when in a rage state or seeing a hostile mob. Its arms were dark gray with gray outlines and the lower half of its body was beige with four gray dots resembling screws on both legs, and its feet end with a dark brown color.

Furnace golems were a rare mob drop that were found in stone tappables, where it had a very low 0.9% chance of obtaining.

Furnace golems handed out torches, similar to the iron golem giving poppies to baby villagers. This behavior was triggered randomly by viewing the golem in a certain angle.

Naturally spawned furnace golems found in Adventures were neutral mobs that attacked the player if provoked by being hit.

When killed, the furnace golem dropped: