This page describes content that exists only in outdated versions of Minecraft Earth.
This feature used to be in the game but has since been removed.
Cluckshroom 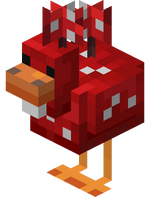 A cluckshroom was a mushroom-covered variant of the normal chicken, found only in Minecraft Earth.

Cluckshrooms left a trail of red mushrooms when they walked in the dark. Otherwise, they mostly had the same AI behavior as chickens, walking aimlessly, avoiding lava and cliffs enough to give fall damage while it wasn't affected by fall damage. Contrary to normal chickens, cluckshrooms seeked darker areas. If a cluckshroom was under direct sunlight, it ran around wildly until it was out of the sun.

Cluckshrooms were of rare rarity and were obtainable by buying the Cluck House buildplate, or from chicken tappables, with a low chance of 2% to get one.

When a cluckshroom was killed, it had a chance of dropping the following: