This page describes content that exists only in outdated versions of Minecraft Earth.
This feature used to be in the game but has since been removed.
Bold Striped Rabbit 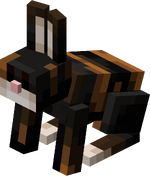 A bold striped rabbit was a messy variant of the rabbit, found only in Minecraft Earth.

Bold striped rabbits were a messy variant of the rabbit. The entirety of its fur was black with various brown patches and stripes scattered throughout its body, forelegs, and face. Its feet had white tips and a white muzzle. Its ears had dark brown tips and its eyes were dark brown in color.

Similar to ordinary rabbits, bold striped rabbits had the same AI behavior, wandering aimlessly, avoiding lava and cliffs that are enough to cause fall damage.